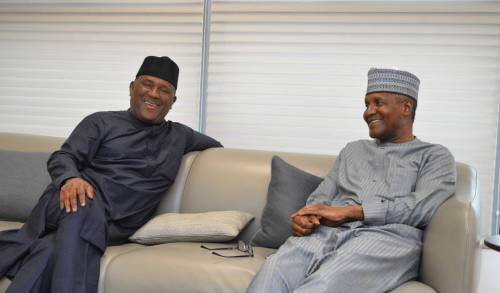 Just like Dangote Cement, the Nigerian Government has given approval to BUA Cement owned by another Northerner, Abdulsamad Rabiu, to resume exports across its land borders, according Saharareporters.

Recall that Michel Puchercos, Managing Director of Dangote Cement, had on Monday informed investors that the company had resumed cement export to Niger and Togo in a controlled measure following a waiver from the government.

In an internal memo signed by Dimka V.D, Custom Comptroller (Enforcement, Hqtrs) on behalf of Deputy Comptroller-General (E,I&I) and seen by SaharaReporters, the Nigerian Government approved the movement of BUA Cement trucks to Niger Republic.

“I am directed to forward herewith a letter from the Office of The National Security Adviser referenced NSA/227/C dates 17th June, 2020 on the above subject matter.

“The trucks will exit and return through Illela Border station in Sokoto State.

“Attached herewith is a list with names of drivers and truck license numbers and other relevant details for ease of reference.

“This is forwarded for information and strict compliance, please,” the memo addressed to Custom Zonal Coordinator in charge of Sokoto/Zamfara commands read.

Reacting to the development, Atedo Peterside, founder of Stanbic IBTC Bank Plc, said, “Allowing legitimate exporters and importers to move their goods across the border should be a no-brainer. Why refuse everybody else and allow only one company (Dangote)? This is why some of us argue that the Nigerian economy is rigged in favour of a handful of well-connected persons.”

In October 2019, President Muhammadu Buhari had ordered the closure of land borders to curb the smuggling of arms, food items and hard drugs into the country.

The closure, which is meant to boost local production and strengthen security, has taken a significant toll on neighbouring countries such as Togo, Ghana and Cote D’Ivoire, who rely on Nigeria’s market of over 200 million people for survival.

Nigerian businesses have also not been able to export their products through the land borders as a result of the closure.