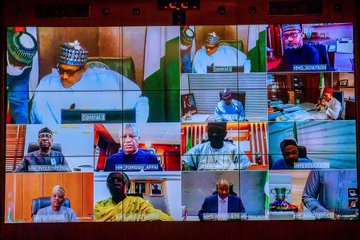 Ministers from the south-west who were directed to relocate to their home states to douse the tension created by the #ENDSARS protests have presented their report to the federal executive council (FEC).

In the report presented earlier on Wednesday according to TheCable, they demanded a thorough investigation into the Lekki toll plaza shooting incident, particularly the role of the military.

Armed men in military uniform had invaded the protest ground at Lekki tollgate in Lagos to forcefully disperse protesters.

In a communiqué read to journalists at the end of an emergency meeting at the Council Chamber of Sir Kashim Ibrahim House in Kaduna on Thursday, the forum said that it regrets, “the diabolical influencers in form of hooliganism, ethnoreligious bigots and even political marauders who are bent on pulling the nation down its knees and pushing for regime change.”

Chairman of the Forum and Governor of Plateau state, Simon Bako Lalong, while reading the communiqué said that the discussion had bordered on national security particularly the nationwide #EndSARS protest which according to him, has led to the wanton destruction of lives and properties.

In October 20, 2020, armed soldiers and police officers shot at unarmed and peaceful #EndSARS protesters at the Lekki toll gate on Tuesday night.

15 people were killed in the shootings according to eyewitness accounts, Amnesty International stated that at least 12 protesters were killed in what the organisation described as “extrajudicial executions”. But the Nigerian military had initially denied then later agreed they were called by the state government to intervened in the protest.

We spent between N3 million and N4.5 million on court cases from 2019 elections – INEC Chairman