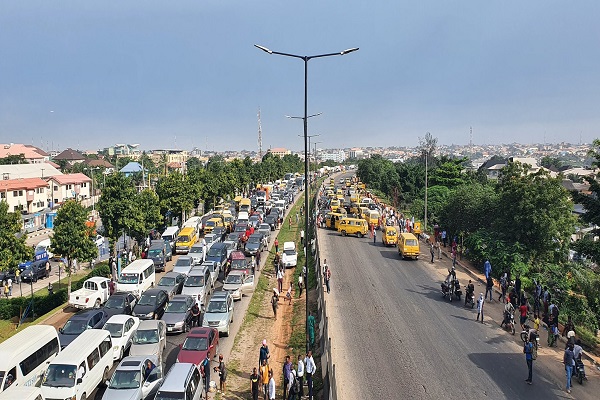 The Lagos State Secretariat was in the early hours of Monday shut by #EndSARS protesters preventing workers from gaining access into the premises.

Thousands of Nigerians continue to march across major cities to demand an end to the Special Anti-Robbery Squad, or SARS, a police unit accused of extrajudicial killings and abuses.

The government announced that the unit has been disbanded, but many Nigerians are skeptical, as officials have promised an end to the unit and its alleged abuses before.

The protesters stormed the secretariat in the early hours of Monday and shut the premises preventing workers from entering the premises.

They locked all the entrance to the Secretariat and motorists and pedestrians were turned back from coming out and going into the premises.

The Governor’s road had remained one of the major venue where the protesters gather everyday with some even sleeping overnight to continue the protest the next day.

But on Monday, the protesters took over the entire entrance into the secretariat preventing workers from going into their offices and carrying out their daily duties unlike before.