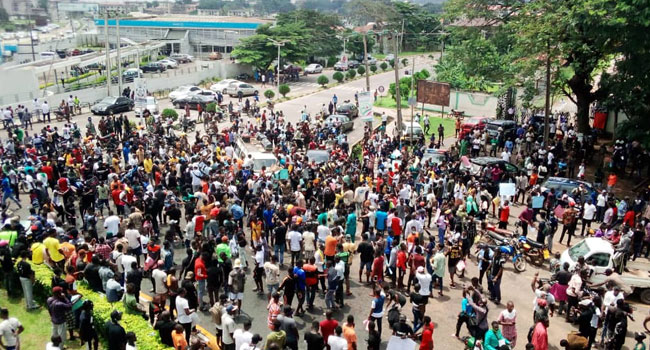 Channels Television reports that all adjoining roads to the secretariat were blocked as a result of the protesting activities and a huge number of protesters.

The protesters demanded to be addressed by the State Governor Seyi Makinde.

The Deputy Governor Rauf Olaniyan however addressed the protesters and informed them that Governor Makinde is currently in Ogbomoso.

According to the deputy governor, Makinde is currently in Ogbomosho on a fact-finding mission into the crisis and violent protest which led to the death of least three persons.

Some hoodlums were also reported to have attacked the palace of the Soun of Ogbomosho where property worth millions of Naira were destroyed.

The deputy governor in solidarity with the protesters carried placards and joined voices with them, condemning police brutality and harassment.

NewsWireNGR recalls that Governor, Seyi Makinde, announced on Monday that security agencies in the state have been deployed to maintain law and order as well as secure lives and property.

Makinde also declared that protesters who are championing the #ENDSARS protest must remain peaceful so as not to negatively affect the peace of the state.

In a state broadcast aired by the network service of the Broadcasting Corporation of Oyo State (BCOS), Monday afternoon ,the governor said security agencies excluding the Nigerian Police, have been deployed by the state government to take the frontline in securing the #ENDSARS protesters and to maintain the peace.

Governor Makinde equally assured the state that he will do everything within his powers to ensure “no further lives are lost.”

According to him, the past few days have been ones of grief for the people of Oyo State. I cannot imagine the pain and frustration of the parents and families of those who have died or are hospitalised as a result of the actions of the Nigeria Police Force during these End SARS protests.

“As I stated clearly, in my earlier statement, peaceful protests are a legitimate way for citizens to make their grievances known to the government and it is totally unacceptable for anyone to be hurt during such protests.

“Last night, I held an emergency meeting with the heads of the main security agencies in Oyo State. I have again restated my position on the ongoing protests to them. And we have agreed that the police should take a back seat as other security agencies take the frontlines in securing the lives of protesters, at this time.”

The governor stated that as of Sunday, operatives of the state-backed security outfit, Operation Burst, had been deployed to Ogbomoso to keep the peace and ensure that protesters will neither be harassed nor brutalised.

While urging residents of the state to go about their businesses without fear,the governer added that “therefore, we have deployed members of Operation Burst to the hot spots, especially Ogbomoso, to ensure that as people protest, they will not be harassed or brutalised.

A statement by the Chief Press Secretary to the governor, Taiwo Adisa, Makinde said “i want to reassure the good people of Oyo State, that I am doing everything within my power, to ensure that no further lives are lost.

“I urge all residents of Oyo State to go about their activities without fear. To the protesters, I say, you can please continue to protest peacefully.

“These are trying times for all of us and I pray that God continues to guide us and give us wisdom to navigate through them,” Governor Makinde said.

Related Topics:Governor Seyi Makinde
Up Next