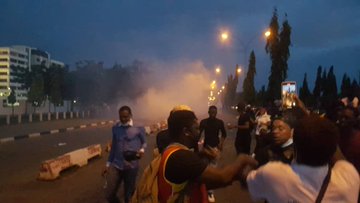 Former Vice President, Atiku Abubakar, has condemned the use of force on #EndSARS protesters across Nigeria.

In a series of tweets on Saturday, Atiku also called on relevant authorities to ensure the youths are heard.

The former vice president asked that all incidents of excessive use of force by security agencies against protesters are investigated.

His comments come on the heels of several reports of violence wrought against the protesters and other citizens, the latest being the killing of a young man in Ogbomoso.

The victim named Jimoh Isiaq was shot during a protest in Ogbomoso, though he was not a part of the protest.

While many say the bullet which killed Isiaq was from the police, the force claim they only used canisters of tear gas to disperse the crowd.

Several videos making the rounds, however, show security operatives firing live arms at those calling for the scrapping of the Special Anti-Robbery Squad (SARS).

In reaction to the use of force against those protesting, Atiku was of the opinion that the fundamental rights of Nigerians to freedom of assembly and freedom of expression must be protected at all costs.

“Nigerians should be provided with a non-toxic environment for #EndSARSProtests.

“It is their constitutional right and an ingredient of democracy.

“They deserve to be heard and not killed or maimed,” Atiku tweeted.

Atiku who had in a previous tweet noted that SARS has morphed into an oppressor of the Nigerian masses said he stands with all those who are peacefully protesting to end police brutality in a bid to enthrone a new policing order that underscores the interest of the citizens.

The elder statesman commended the tenacity of protesters who he described as brave youths who have stayed out on the streets all day and night to make their voices heard.

“My victory is divine” Governor Akeredolu as #OndoDecides2020