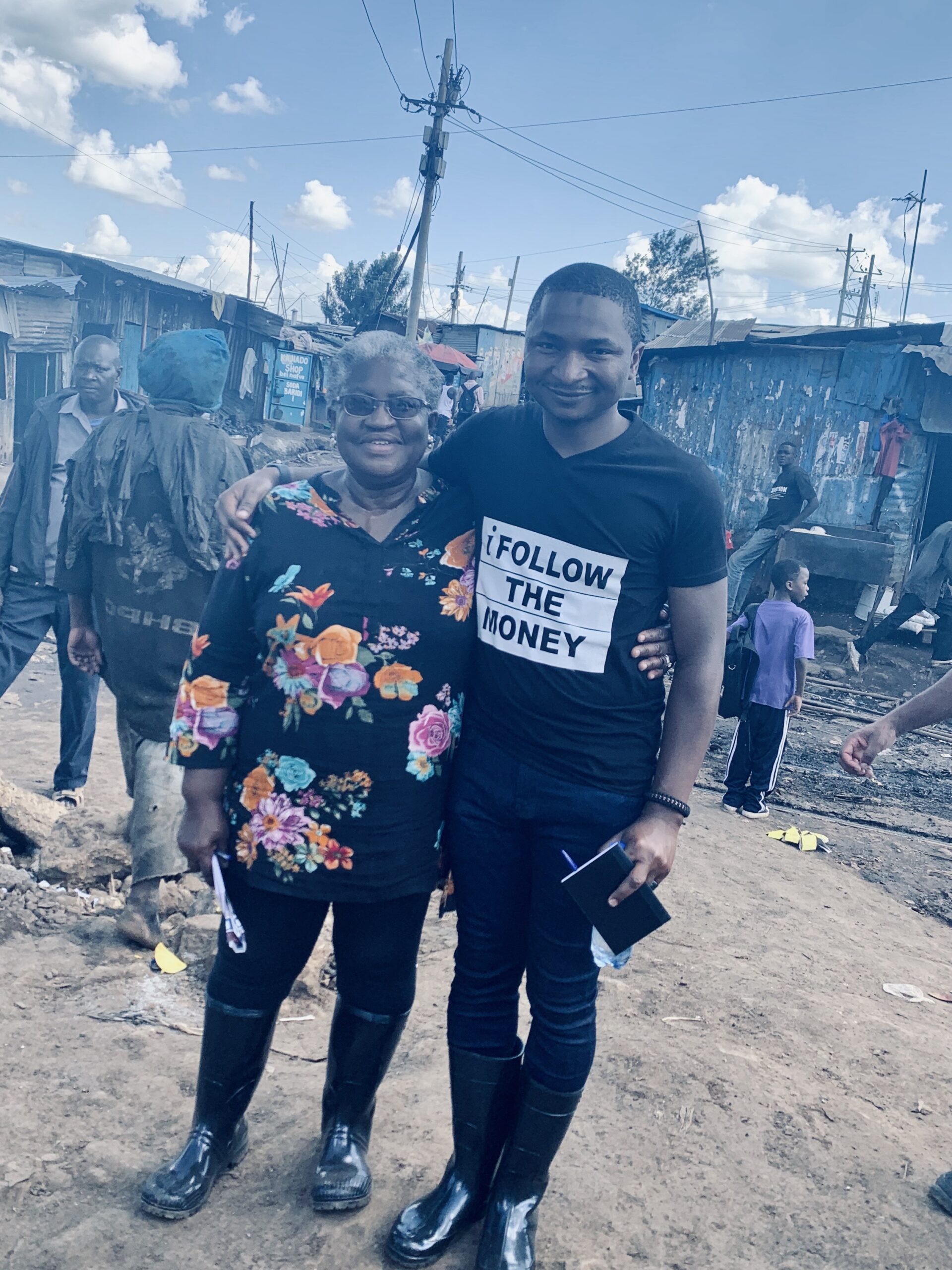 As a young executive, I am conscious of how most of the decisions I take are based on acquired knowledge and not on personal experiences. Naturally, this makes the ecosystem even more volatile. The challenge is that people like me must constantly adapt; and in order to maintain a mental compass, we must identify relevant role models to learn from. Hence, we are like the pupa looking for where to cling until it is able to grow wings and fly.

For many of us, the search for credible icons is not an easy task. In many cases, we depend on secondhand mentorship from identified public figures of celebrated pedigree. We read their books, watch their news and digest their published thoughts. We become their followers online and offline, with a silent prayer in our heart that one day we might climb to a pedestal high enough to merit a handshake from these special ones.

This is why I consider it a divine favour that I was able to meet Dr Okonjo-Iweala in person on two occasions. My encounter with her made me realize that the brains and virtues I saw from afar were just the tip of the iceberg. She is a gift to Nigeria, and indeed, Africa. As a matter of fact, with all her achievements and global recognitions, there is no air of intellectual aloofness about her. Her humility is natural and her concern for the development of the continent is contagious.

My first encounter with this icon was last year when Jack Dorsey, the co-founder and CEO of Twitter, visited Nigeria. I was one of the young leaders invited to meet the American entrepreneur. The first day was at a cocktail reception and, the next day, a panel discussion organised by the University of Science and Technology, Abuja, where I was scheduled to speak on the positive effect of social media on the economic growth of young people. There, I would share the story of how Follow The Money, at its inception, leveraged social media to amplify grassroots’ voices thereby accelerating the government’s reaction and  the release of funds and resources needed for vital rural interventions.

That night at the cocktail reception, Dr Okonjo-Iweala who is also on the board of Twitter would host us. I was elated to be in the same immediate space as my role model. I suddenly felt a tinge of intimidation. However, when I summoned the courage to walk up to this global giant to introduce myself, I got the surprise of my life.

“Good evening, ma’am. My name is Hamzat Lawal from Connected Development, CODE,” I recited with all the confidence I could muster.

“You are THE Hamzat Lawal of Follow The Money! My son is your fan and speaks very highly of you. Hamzat, let me introduce you to Dorsey, the CEO of Twitter. You should speak to Jack. Tell him about the interesting work you do.”

That was how THE Dr Okonjo-Iweala took me by the hand and introduced me to the world-famous Dorsey, who engaged me in a discussion for more than twenty minutes. My role model opened the door of the world to me. It was during my second meeting with her that I found out that unlocking doors of opportunities for others to walk through comes natural to this amazon. This is, undoubtedly, how she has added immense value to the many projects and organizations under her leadership.

Early this year, 2020, I was one of the ten development experts and thought leaders invited by SHOFCO to a consultative meeting in Kenya. The round-table was to deliberate on the first-of-its-kind Poverty Conference to be held right in the heart of Kibera slum in Nairobi: the largest slum in Africa and the third largest in the world.

Dr Okojo-Iweala chaired the meeting. Her brilliance and skills in guiding the deliberations on ending poverty in Africa were formidable.

To me, working with this International Development Expert and former World Bank Economist, who has had only commendations and no eye-brow raised for the success her tenure willed,  was  like being in a Development Temple. She masterfully led the conversation those three days. We deliberated on key issues and toured Kibera Slum. At the end, the team was satisfied with the proposed outcomes of the Conference which had huge prospects for significantly reducing poverty in Africa– until COVID-19 happened.

The highlight of that meeting was sitting at lunch with her to share the Follow The Money vision and also listen to her share experiences working with the Nigerian Government. I got to learn a lot more than what I had read in her best-selling book, “Fighting Corruption is Dangerous”.

Dr Okonjo-Iweala represents what the WTO needs at this moment: a dedicated “redemptionist”. The international body is actually staging a swift contest to replace outgoing Director-General Roberto Azevedo who is stepping down a year early. The new WTO leader will be taking on an institution that was beset with huge challenges even before the pandemic-driven global economic crisis struck. As the global community now struggles to recover from COVID-19, the role of free and fair trade will be very crucial to the world’s recovery.

The two-time Nigeria’s Minister of Finance has bagged the experience of pushing a troubled developing country from the doldrums of economic mismanagement to the high pedestal of continental superstardom. It was under Dr Okonjo-Iweala’s leadership that Nigeria became the biggest economy in Africa.

I have looked at all the candidates for the WTO top job. With COVID-19 breathing down our necks, we need to rebuild. Okonjo-Iweala is a builder. With her experience, knowledge and networks (at Africa’s biggest economy Nigeria, World Bank, Twitter, GAVI, etc.), she is superbly positioned to lead the WTO at a time like this.

What is more, it is now time for women to lead. Not only are they showing exceptional leadership globally, the world just kicked off the Decade of Action for the Sustainable Development Goals (SDGs) and we must make room for women to tie up all the loose ends before 2030. In her role as the WTO boss, Okonjo-Iweala will use global trade to lead the achievement of Goal 17 – Partnerships for the Goals – which will make it possible to achieve all the other goals. Who is better to lead the world as we fight for the survival of mankind more than women?

The game has changed. A new leadership style is emerging and that style is uniquely female. We have Amina J. Mohammed, the Deputy Secretary General of the United Nations, who was part of the team that led the post-2015 development agenda rallying stakeholders and building Nigeria’s pre-SDGs infrastructure. There are others in the corporate world, from Meg Whitman of eBay to Marcy Carsey of Carsey-Werner and Oxygen Media, from Martha Ingram of Ingram Industries to Shelly Lazarus of Ogilvy & Mather Worldwide. There is now a spread of high-ranking female leaders across the globe who have not only carved a niche for themselves but are making tangible and replicable impacts.

Let me leave it to what a fellow woman said of the womenfolk. Esther Wachs Book, in her seminal work, “Why the Best Man for the Job is a Woman”, reveals how a new paradigm has emerged on the global leadership horizon. After incisive arguments and examples, she introduced the world to a new breed of leader: “The Female Leader.”

Indeed, with three women jostling for the WTO top job, it is evident that the world is catching up to this dynamic. However, among these women, Ngozi Okonjo-Iweala stands tallest. I believe she is the solution and should be given the job.

Hamzat Lawal is the Chief Executive of Connected Development (CODE) and Founder of Follow The Money.

Edo Decides: Early signs of a transition from party-based elections?