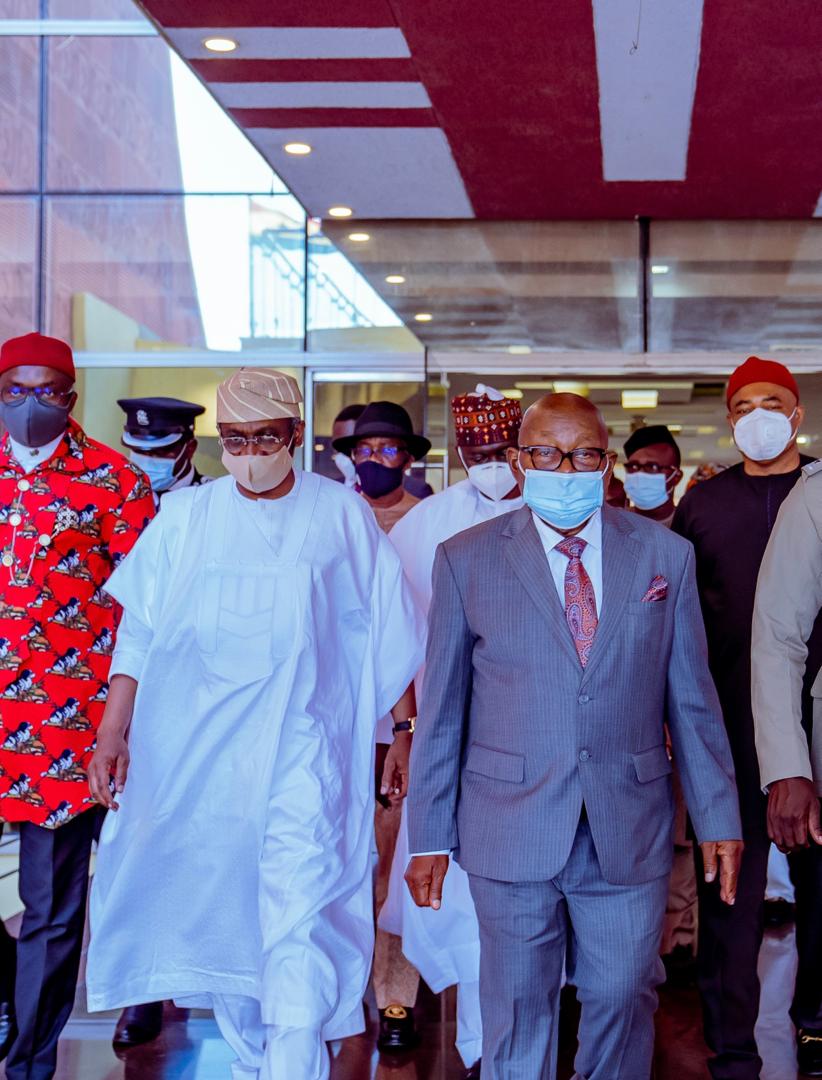 Nigeria and Ghana are will establish a business council, as well as a joint ministerial committee as part of efforts to address some of the disputes facing both countries.

This was disclosed in a statement signed by the Official Spokesperson for the House of Representatives, Rep. Benjamin O. Kalu on Friday.

According to the statement, the President of Ghana, Professor Nana Akufo Addo assured the Speaker of Nigeria’s House of Representatives, Rep. Femi Gbajabiamila, of the readiness of the Ghanaian government to consider the resolutions reached at the ‘Legislative Diplomacy Bilateral Meeting’ between senior legislators of both countries on September 2, 2020, at the Ghanaian Parliament House.

The Ghanaian President gave the assurance when the Speaker of Ghana’s parliament, Prof. Mike Oquaye, upon completion of the 2-day extensive dialogue, led his Nigerian counterpart on a courtesy visit to the President at the Jubilee House, Accra, Ghana on Thursday.

The legislative diplomacy dialogue became imperative as the parliaments of the two countries sought modalities to resolve challenges and provide an enabling business environment for foreign traders including Nigerians doing business in Ghana.

Several foreign businesses, many Nigerian-owned, in Ghana have been facing challenges in the demand for $1m capital base for foreign traders, as enshrined in the Ghana Investment Promotion Center GIPC Act (2013).

Responding to a request by Gbajabiamila for a review of the Ghana Investment Promotion Centre (GIPC) Act to make certain concessions, President Akufo-Addo said the request was in order as it “makes a lot of sense”.

The Ghanaian President, who expressed satisfaction with Gbajabiamila’s visit, endorsed his proposal for the establishment of a ‘Nigeria-Ghana Business Council’ established by law in both countries, and he additionally suggested the setting up of a joint ministerial committee between the two countries that will “shepherd” issues between Ghana and Nigeria.

He told Gbajabiamila he would also raise the issue with President Muhammadu Buhari when they meet at the ECOWAS Summit on Monday.

“I think the way forward, which is really what matters in situations like this, that is being suggested, one that I find very acceptable, the idea of legislation, a Nigeria-Ghana business council that will superintendent trade matters and investment matters between our two countries, may be long overdue,” Akufo Addo said.

“The time has come for us to take these worthwhile steps. I suggested to Mr. President that it will be a good idea to set up a joint ministerial committee of ministers from both sides who will be responsible for shepherding Ghana and Nigeria issues, reporting to both presidents at any one time, and that is how they should be resolved.”

“I am hoping when I see him on Monday for the ECOWAS summit, we can advance these discussions and come to a final conclusion.

“The way you yourselves have come about this matter is very satisfactory, and it requires our support. The review that you are asking for, why not? if it works in our mutual perspectives, we can take it for granted that your request will be taken seriously. We will have a look at it.”

“So, the request for the review makes a lot of sense,” the Ghanaian President added.

Earlier, Gbajabiamila, who was in the company of some of his colleagues in Nigeria’s House of Representatives, which included the Chairmen of House Committees on Foreign Affairs, Media and Public Affairs, Deputy chairmen of committee on Diaspora, Federal road safety and a member of the ECOWAS Parliament, told the Ghanaian President at the Jubilee House, that they were in Ghana to make efforts through parliamentary diplomacy to resolve the issues at stake.

Meanwhile, in a communique issued jointly at the end of the bilateral meeting between members of the two Parliaments led by their respective Speakers, Gbajabiamila and Prof. Mike Oquaye, it was resolved that “measures will be adopted to support law-abiding traders to properly regularise their business operations to alleviate the trade challenges occasioned by the alleged closure of the retail stores, in view of the ravaging impact of COVID-19 pandemic on businesses and families in both countries.”

They acknowledged that many stakeholders in the retail sector have limited appreciation of the trade laws of Ghana, in particular, Section 28 of the GIPC Act, which provides for the conditions under which non-Ghanaians can engage in trading activities and urged the relevant regulatory authorities including the GIPC and Trade Attaches of foreign missions to educate their citizens on the trade laws.

They equally emphasized the need to respect the sovereignty of Member States of ECOWAS and their laws but, in doing so, efforts must be made to ensure that the ECOWAS Agenda for free movement of people and goods in furtherance of a shared and prosperous future of citizens of the sub-region is not compromised.

“A meeting will be held between the Trade and Foreign Affairs Committees of both Legislatures to deliberate on applications of Trade Laws, in particular, the GIPC Act, 2013 (Act 865) and make recommendations for appropriate solutions; and a Joint Committee will be established composed of Members of both Legislatures to explore the possible passage of reciprocal legislation, which could be potentially called the “Ghana-Nigeria Friendship Act” which shall propose “Ghana-Nigeria Business Council” to provide a framework to sustain the friendship and benefits to citizens of the two nations.”