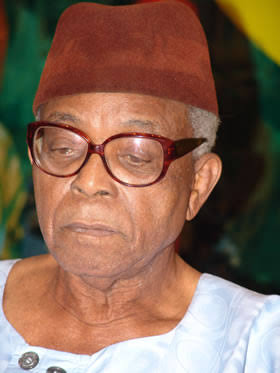 The National Council of State, NCS, meeting presided over by President Muhammadu Buhari on Thursday, ratified the presidential pardon granted to a former governor of now-defunct Bendel State, Professor Ambrose Alli, over N900,000 fraud and three other Nigerians.

Addressing State House Correspondents at the end of the meeting which had in attendance four former Heads of States – General Yakubu Gowon, General Ibrahim Babangida; Chief Ernest Shonekan, General Abdulsalami Abubakar, and Goodluck Jonathan, Attorney General of the Federation and Minister of Justice, Abubakar Malami, noted that the ratification follows his presentation of a memo, relating to the Presidential Advisory Committee on Prerogative of Mercy.

Malami said the the Council of State also approved the appointment of two new legal practitioners as members of Federal Judicial Service Commission.

The AGF explained that the law confers on President Buhari the right to appoint members of the federal judicial service commission, subject to consultation with the council of State.

The Secretary to the Government of the Federation, Boss Mustapha, on his part said Council of State also approved the appointment of Silas Agara, as Chairman of National Population Commission.

Related Topics:Ambrose Ali
Up Next