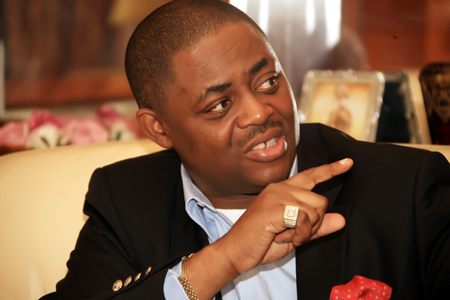 A former minister of aviation, Mr Femi Fani-Kayode was captured in a now viral video, visibly angry when a Daily Trust reporter asked him who was funding his trips to the South-South states he claimed he had visited to meet with the governors and inspect their projects.

He said the reporter had provoked and looked down on him, maintaining that he is from a very wealthy background.

“What type of stupid question is that?

“Do you know who you are talking to?

“I will not take any question from this man?

“Which bankroll, to do what, who can give me money for anything?

“I could see from your face before you got here how stupid you are.

“Don’t judge me by your own standard.

“I am not one of these politicians…

“I have been locked up by this government,

“I have been persecuted more than most of the politicians you follow for brown envelope.

“I am not a poor man, I have never been and I will never be.

“Bankroll who, a former minister, a lawyer?

“Don’t ever try it with me again, look at me very well.

“And if any person sent you to ask that question and gave you brown envelope, go and tell them you got more than they bargained for.

“That is not the standard of Daily Trust at all and I will report you to your publisher.

“Somebody has been on the road for how long and you are coming to ask this question, very stupid.”

After interventions and pleas from the Chief Press Secretary to Governor Ben Ayade, Mr Christian ita, and other journalists, the ex-minister finally left the Daily Trust reporter.

The Daily Trust reports that when he returned to his suite, he sent one of his security aides to further threaten the reporter.

The man allegedly accosted the reporter, challenging him over the question he asked his principal while also inquiring about the reporter’s next action.

The reporter, sensing how tensed up the atmosphere was, said “I had apologized to the ex-minister.

“If the usage of the word ‘bankroll’ was offensive to him, I withdraw it.

The Former had carried out a one week visit to the South South.

At Cross River State, Governor Ayade hosted and took him round his projects, mostly in the southern part of the state.

Addressing journalists at the end of his visit at the Governors private hotel in Calabar, he lavished praises on the governor for embarking on multiple and gigantic projects.

Related Topics:Femi Fani-Kayode
Up Next

President Buhari will deliver the opening speech at the NBA conference