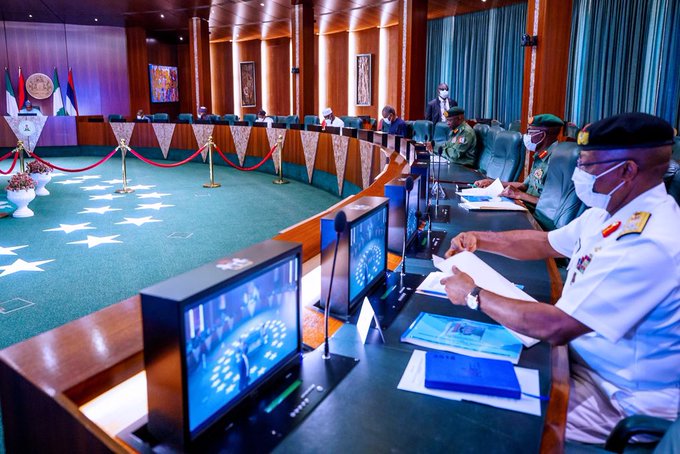 Peesident Muhammadu Buhari has questioned how despite the shutdown of major borders, bandits still have access to sophisticated weapons.

“How is it that they are not short of small arms?” he queried the security and intelligence chiefs

The president, however, dispelled the assumptions that the terrorists in the Northeast had far more weapons and money than the government, stressing that what is left of them are “mere scavengers desperate for food, raiding shops and markets, and killing innocent persons in the process.”

Buhari, who informed the governors of the imminent shipment of military weapons and aircraft from Jordan, China and the United States, again asked for patience on the part of the public because the new weapons and aircraft must be manned by trained fighters and pilots who must first receive appropriate training.

According to Buhari, “We have said enough on the need for them to rejig their operations.

“I am glad that there is better synergy and cooperation, which are very important.

“I have directed the service chiefs to meet among themselves in-between the National Security Council meetings.

“The services have resources; yes, they need more, and mobility, and are doing their best, but there is a need for better gathering and interpretation of intelligence.

“Our intelligence-gathering must be improved.”

Buhari, who expressed satisfaction with the level of support from neighbouring countries in the war against terrorism, restated that intelligence-gathering must improve to be able to track small arms in the Northwest, Northcentral and Northeast States.

“They are cooperating with us.

“On Boko Haram, we are making progress with Benin, Niger, Chad and Cameroon,” he said.

Former US Ambassador to Nigeria, Walter Carrington, Dies at 90