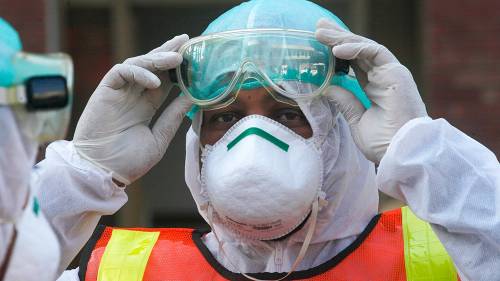 Officials of the Oshodi-Isolo Local Government Area of Lagos State have been accused of demanding money for fumigation and certificates from churches in the community.

Punch Newspaper reports that the council officials demanded N15,000 from some churches for fumigation and clearance certificates.

The pastor of a Pentecostal church, who asked not to be identified, said when the officers approached him, he informed them that some private individuals had already fumigated his church.

“They asked if those who did the fumigation gave us a certificate and we said no.

“They said we should prepare for them because when they come for inspection, they would demand a certificate of fumigation from us.

“We told them it’s not part of the listed items by the Lagos State Government. But they insisted that it’s a requirement for them.

“We asked how much it would cost and they said N15,000. We were surprised and told them that we did not have any money and that we had given a lot of palliatives to the community.

“After some haggling, they said we should pay N10,000, which we said we could not afford. A community leader told them not to come to our church yesterday (Sunday), and we would sort it out this week,” the pastor said.

But the General Overseer of the Temple Rebuilders Ministry, Pastor Barnabas Otoibhi, said his church was not harassed by the council workers.

Otoibhi, however, recalled representing the Christian Association of Nigeria in the area at a meeting of the council on June 11, where the issue of fumigation was discussed.

“It was a meeting with religious organisations and we were addressed by the Secretary to the local government, Taoheed Abiola; and Special Assistant on the Environment, Yusuf Adesanya.

“We were told that churches would fumigate and the cost would be paid at 50 per cent ratio to be shared by the church and the government.

“We were told that they would do inspection to ensure everyone complied with the rules. There was no mention of fumigation certificates,” he added.

The Chairman of the Oshodi/Isolo LGA, Bolaji Ariyoh, said whatever was being demanded by the council was in compliance with a directive of the Lagos State House of Assembly.

“If it is the regulation, there is nothing anyone can do about it. I don’t remember the amount, but if that is the bill given to them, then it is meant to be paid,” he said.

However, the Vice-Chairman, Daisi Oso, said the council was not billing anyone or demanding any certificate.

“It is not in our purview to check any church. It is the Lagos State Government that is doing it and there is an agency in charge of that. As a local government, we don’t know about it,” he said.

Oso, however, noted that there was an environmental unit in the council responsible for the fumigation of all public places, including churches and mosques.