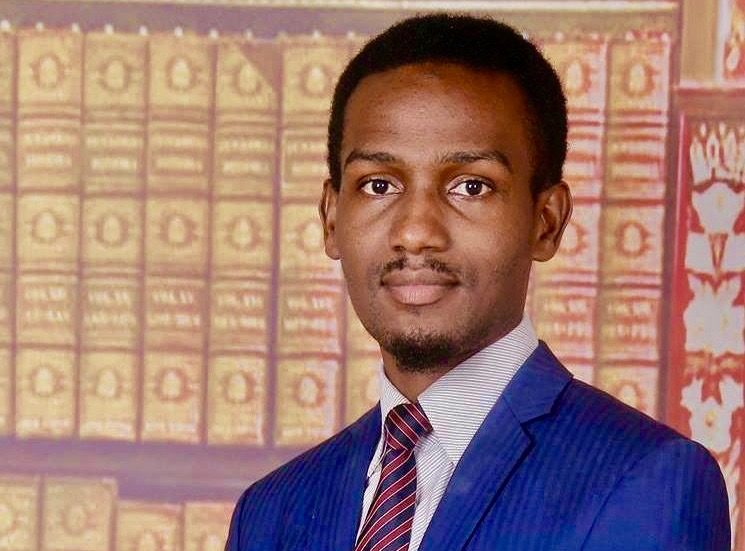 Abubakar Idris, popularly known as Dadiyata is a fierce critic of the Buhari/APC administration. He is a strong voice to be reckoned with, on and off the social media. He also commands deep respect among the young Kwankwasiyya movement, which he is also a strong part of. A soft spoken unassuming young man with a great sense of humor.

Dadiyata is married with kids. On the 2nd of August 2019, about a year ago, this brilliant mind with a very prospective future was abducted in his Kaduna home at Barnawa while attempting to gain access into his house.

Before his sudden disappearance, Dadiyata was a lecturer at the Federal University Dutsinma, Katsina State. He was 34 years old.
In an account given by the police, Mr. Abubakar Idris (Dadiyata) was returning home at about 1 a.m. when some armed men, breached his house’s security, and took him away in his BMW car. One year after, he is yet to be found.

The trauma a wife experiences for not knowing the whereabout of her husband is very grievous. The uneasiness in the heart of children not seeing their loving father like they usually do is pretty much disheartening.
The excruciati

ng pain of a parent not having a single clue about the situation of their “missing” son is obviously disturbing. I have watched and read several interviews granted by his Dad and Wife; honestly, mere words cannot properly elucidate what that family is currently going through.

Is there a recurring pattern here? Absolutely, yes. Recall, Mr. Jones Abiri was “disappeared” in June 2016 and held captive for over two years without access to family or legal representation. The department of state service (DSS) delibrately  provided no information about Mr. Jones Abiri, and speculation swirled that he was dead. Surprisingly, around August 2018, after human rights groups repeatedly raised his case vociferously with the Government, Mr. Jones Abiri was brought to a magistrate’s court in Abuja. This was to the amazement of many.

Articles 1 and 2 of the United Nations’ Declaration on the Protection of All Persons from Enforced Disappearance states that:
1. “Any act of enforced disappearance is an offence to human dignity. It is condemned as a denial of the purposes of the Charter of the United Nations and as a grave and flagrant violation of the human rights and fundamental freedoms proclaimed in the Universal Declaration of Human Rights and reaffirmed and developed in international instruments in this field.
2. Any act of enforced disappearance places the persons subjected thereto outside the protection of the law and inflicts severe suffering on them and their families. It constitutes a violation of the rules of international law guaranteeing, inter alia , the right to recognition as a person before the law, the right to liberty and security of the person and the right not to be subjected to torture and other cruel, inhuman or degrading treatment or punishment. It also violates or constitutes a grave threat to the right to life.
Article 21. No State shall practise, permit or tolerate enforced disappearances. 2. States shall act at the national and regional levels and in cooperation with the United Nations to contribute by all means to the prevention and eradication of enforced disappearance.”

Certainly, if Dadiyata’s sudden dissaperance has any connection to the usual kidnapping for money, which has gradually become a norm in the Nigerian state, his abductors would have by now established contact with his family. Since for them, it is purely transactional.

So, if they don’t have him, this means… Well, any recondite can easily provide an answer to that.
Where is Dadiyata? Who has Dadiyata? Who dissapeared him? What are his offenses? Who should we hold to account? Will Dadiyata ever return? Who can we beg? The unbearably distressing state his family is currently in can at best be imagined.

I feel a great deal of pain as I write this. It weighs me down so much. A young man suddenly disappeared and none of the Country’s security apparatus has been able to provide any definitive information or inquiry made by Nigerians.

Most assuredly, Nigeria has failed the family of Dadiyata. In Country governed by law and order, Dadiyata went missing without trace. We must be genuinely worried as a people. Who  will be the next victim? Me? You? Who knows!

The events surrounding Dadiyata’s predicament is suspect. As I have always done, I reiterate this clarion call on the Federal Government, Kaduna State Government and other relevant security agencies to either have him released unconditionally or charge him to a law court with competent jurisdiction as constitutionally enshrined or fish out the perpetrators of this shamefully disgusting act!

People should not  mysteriously disappear and held incommunicado for promulgating contrary views or for criticizing leadership. Such an heartless act against Citizens is preposterous, it stands condemned.

Have you no sympathy? Have you no feelings? Where is your humanity? Have we become monsters because of politics? His wife needs him! His Children misses their father! His parents and siblings wants him back!

Just like Mr. Jones Abiri, will Dadiyata also “reappear”? Will he ever be found? Deeply in my heart, I pray so.
Free Dadiyata, Now!

Oyewole Michael, a public analyst and political commentator can be reached via oyewolemichael9@gmail.com. He tweets via @Rolex7Michael

Fredrick Nwabufo: The revolution will come – and Buhari will join it