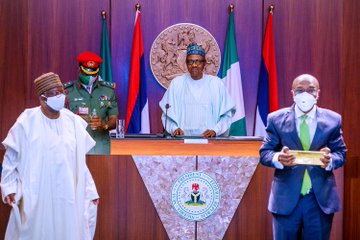 In November 1995, the Nigerian government murdered 9 Ogoni environmental activists, including Ken Saro-Wiwa primarily to put a stop to the agitations of the Ogoni ethnic nationality for economic and environment justice. The demands of the Ogonis as contained in the Ogoni Bill of Rights included amongst other things, the right to utilise Ogoni resources to develop Ogoni land.

The Abacha military government responded visiting the Ogoni people with a reign of terror. In November 1999, when President Obasanjo ordered the armed forces to invade Odi in Bayelsa State and perpetrate a genocide, the reason as stated by his Minister of Defence, Gen. T. Y. Danjuma, was to protect oil exploration activities.

In May 2009, when all branches of Nigeria’s military invaded Gbaramatu Kingdom in Delta State during a cultural festival and massacred an estimated 10 – 20% of the population, it was to kill the resistance spirit of the people and to weaken their resolve to protest the economic injustice. Simply put, the Nigerian state crafted for the sole purpose of extracting oil from the Niger Delta, sees no qualms with going as far as committing genocide against the ethnic nationalities of the region so other groups outside the region can continue to exploit the resources of the Niger Delta using state power and means, while also preventing the Niger Delta people from doing same. All these have been legalised using several laws, chief of which is the Land Use Act, and Decree 24 which is currently referred to as the “Nigerian Constitution”.

On 16th July 2020, the President Buhari government did something significant, but which was overshadowed by the House of Representative’s Hearing on the Niger Delta Development Commission (NDDC). He circumvented legalities to put in place measures to aid and facilitate resource ownership and control, for mostly Northern Nigerian states rich in gold reserves. In the press release from the Presidential Artisanal Gold Mining Initiative (PAGMI), the government informed the world that not only was it providing funding and infrastructure to aid illegal (as per the law) gold miners, but the Central Bank of Nigeria would be purchasing gold from the miners. It threw a party and on display was a sample of the gold already mined by artisanal miners, paid for by the Central Bank from monies earned from crude exploitation in the Niger Delta, and ready to be put in the CBN vault to serve as part of reserves for the Naira.

With this singular initiative, the President succeeded in granting states in Northern Nigeria such as his home state of Katsina, Zamfara, and Kaduna as well as the Southwest state of Osun resource ownership, while deftly neglecting to alter the extractive laws surrounding the Niger Delta where oil is mined and not gold. This means that, while the gold-rich states can fully exploit and manage their gold resources while only paying tax, artisanal refiners in the Niger Delta will continue to be attacked by the military for engaging in artisanal crude refining. This is despite recent research by the Stakeholders Democracy Network (SDN) going as far as proving that the crude refined in the Niger Delta is cleaner compared to those imported. This very initiative of resource ownership has been echoed by different ethnic groups in in the Niger Delta in recent years and has been conveniently ignored. Ironically, it was this same initiative when pursued fervently by the Niger Delta people, that saw current members of this government such as Hamid Ali and Ibrahim Gambari playing active roles in the execution of Ken Saro-Wiwa, and the rationalisation of same to the world thereafter.

Notwithstanding the ethnic prejudice employed in the way and manner resource control garbed as PAGMI has been granted to states in Northern Nigeria, it is an initiative that is good for the development of Northern Nigeria, and by extension the country. The Niger Delta people have and will continue to emphasize the need to have a country where there is justice and fairness, where the different people that comprise the state have the right to manage their economic resources, and not one where a section of the country will use its access to political power to commandeer institutions of the state and the resources of other groups, while also keeping its resources for itself like is presently being done in Nigeria.
As Nigeria approaches it 60th anniversary, and just as the people of Northern Nigeria have been granted their otherwise natural right to exploit their gold resources without being shot at or having to shoot back, the government should also understand and willingly accept the rights of the Niger Delta people to exploit their hydrocarbon resource without being shot at, and or having to shoot back.