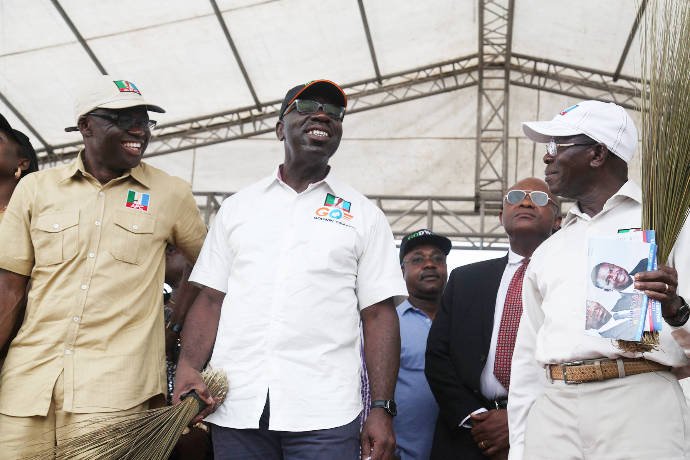 The immediate past National Chairman of the All Progressives Congress, Adams Oshiomhole, has said he made a mistake nominating Governor Godwin Obaseki as his successor in 2016.

He said with Obaseki’s defection, and that of his deputy to the Peoples Democratic Party, “the bad heads in our party are gone”.

Oshiomhole stated this when he addressed a crowd of party supporters who thronged his residence in Edo State.

He said Obaseki used obnoxious means, including the destruction of properties and unwarranted arrest of members, to destroy the party in the state.

He said, “The governor was demolishing the houses of our members while some were being jailed for trump up charges; these are the people who fought for him to become governor.

“I begged those who were being persecuted to take it easy, that they shouldn’t burn the house we all laboured to build because we want to smoke out the snake. Now, the snake has been smoked out of the house.

“A few weeks earlier, the snake said APC was his house and that he was not leaving. Less than 72 hours after saying this, he left. If we had burnt the house because the snake was giving us a problem, we would all have been homeless by now.

“I have come home for only one project. I am not going back to Abuja until the project is completed. I came back home not to rest, but to work.”

Critics of the presidency should appreciate due process – Garba Shehu