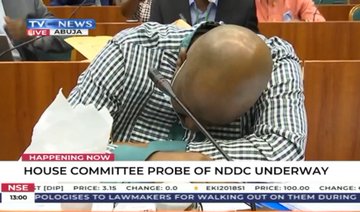 Pondei fainted on Monday during a session of the house of representatives committee probing the alleged mismanagement of N81.5 billion by the interim management of the NDDC.

In a statement, Charles Odili, the commission’s director of corporate affairs, said Pondei collapsed because he ignored his doctors’ advice not to attend the session.

“The commission wishes to disclose that Prof Pondei has been ill for the past two weeks. This morning, his condition deteriorated, and his doctors advised against attending the hearing,” he said.

“However, he ignored his doctors’ advice because of the realisation that his traducers will use his absence at the hearing to soil his name and reputation.

“He thought he could make it through the hearing and take care of his health later. As it turned out, his doctors were right. Prof Pondei is in a stable condition at a clinic in Abuja.”

Odili said Pondei who assumed office in February had spent his tenure under COVID-19 conditions.

He added that Pondei has an official duty to answer for the activities of the commission and what happened between 2008 and 2012.