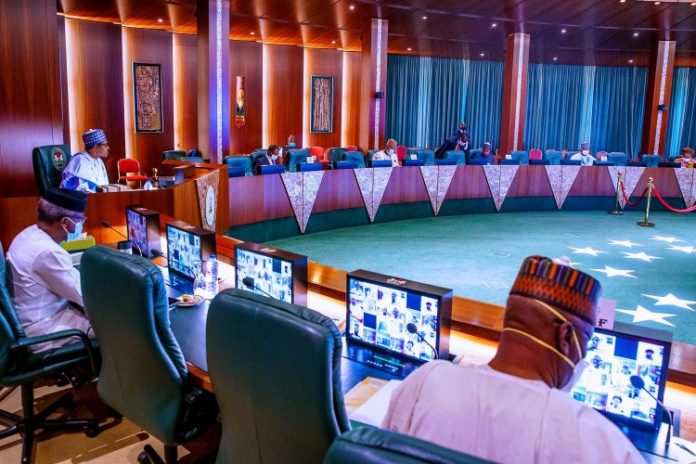 The meeting that was presided over by President Muhammadu Buhari at the Council Chamber of the State House approved an N12.66 trillion budget for each of the three fiscal years.

The Minister of State for Finance, Budget, and National Planning, Mr. Clement Agba, disclosed this while addressing State House correspondents at the end of the Council meeting in Abuja.

Agba listed other projections in the budget as 40 dollars per barrel oil benchmark, oil production volume of 1.6 million barrel per day, the inflation rate of 11.9 percent, projected gross domestic growth rate of three percent, and revenue target of N7.50 trillion.

On projected revenue for 2021, the minister said: “Yes, I spoke of the various assumptions that have been made in terms of parameters and those assumptions are what drives revenues that we get and in terms of how you are able to reflate the economy and spend helps your GDP.

“For Nigeria, it was projected that by the end of this year we should have the GDP top at -4.42 percent. However, with the stimulus, if properly done and executed, we expect that the GDP will improve to about negative -1.8 percent.

“Even though the oil production is much lower than our capacity because we are restricted by the OPEC Plus quota in order to get the prices at par, we have brought in 63 Government Owned Enterprises (GOE).

“We are bringing them into the budget in order to be able to bring up additional N2.17 trillion into the budget, hence we are saying we are projecting a larger budget size for 2021 over and above the N10.84 trillion for the revised 2020 budget.

“When you look at the N7.5 trillion and the expectations to spend N12 trillion, yes definitely there will be gap and that gap has to be financed.

“Even in the 2020 budget we had provisions to repay debt and in 2021 there is provision to repay debt. There is a sinking fund, we look at the ratio and ensure that we are able to pay our debts.

“Of course that is why we have the debt management office to run those numbers and advise us.”

The Minister of State for Education, Mr. Chukwuemeka Nwajiuba also disclosed that the Council approved N136 million for the procurement of theatre seats and computers for the University of Benin in Edo State.

“The project is being funded by the 2019 Tertiary Education funds allocated to the school in the sum of N136 million and the contract was approved by FEC as proposed by the University of Benin and they will now proceed with the procurement.”

On the federal government’s position on the resumption of schools, the minister said the decision not to reopen schools remained the same.

According to him, the government is still meeting with stakeholders in the education sector to chart the way forward.

He said: “We are still meeting with parents over that; we are not confident yet that everywhere is safe, the number of COVID-19 infections from the National Centre for Disease Control (NCDC) is still very alarming and we have presented this to parents and all stakeholders in the education system.

“We are still meeting with them; in fact, there is a stakeholder meeting slated for Monday next week.’’

The minister revealed that the West African Examinations Council (WAEC) was also consulting and looking at a possible change of date for final year exams for graduating secondary school students.

“WAEC on its own part is also negotiating with other West African countries to look at possible shift in date and once they are through with that meeting and hopefully when we are also through with the consultations, if there is any change in the ministry’s position, we will communicate,” he added.