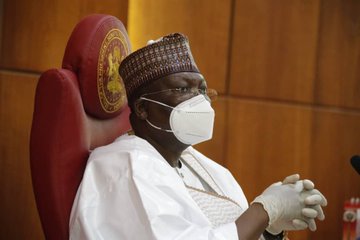 Lawan gave the assurance in his remarks following a point of order raised by Sen. Danjuma La’ah (PDP – Kaduna South) during Tuesday’s plenary.

La’ah, while coming under Order 43 of the Senate Standing Rules, lamented the incessant killings of his people in Kaduna South by suspected armed bandits.

“I wish to bring a request before this Senate, that there is incessant killings in Kaduna South, which I’m seeking the help of the Senate to send military men and police to help us overcome the situation in Southern Kaduna.

“It has become a very serious matter that many people are being killed.

“The situation is very embarrassing and I’m pleading with the National Assembly to request the Federal Government to send the Police and armed men to protect the lives of my people and their property.

“It is unbecoming, as this situation has been on for many years and it has got to this point even though I’ve been complaining.

“The situation as at the other time was calmed down, but it has started again, and I pray the National Assembly will help to provide military men to help the situation,” the lawmaker said.

The Senate President in his response, expressed the willingness of the National Assembly to engage security agencies with a view to upscaling operations around areas prone to attacks in Southern Kaduna.