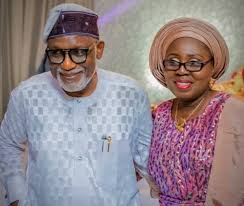 Following the demise of the Ondo State Commissioner for Health, Dr. Wahab Adegbenro, who died at the age 65 for Covid-19.

There seem to be more cases from the state as the wife of the Ondo State Governor, Mrs Betty Anyanwu-Akeredolu, one of the security aides to governor, and the Chief Medical Director of the University of Medical Sciences Teaching Hospital, Ondo, Dr Oluwole Ige, were confirmed to have been infected with  COVID-19.

It was gathered that the commissioner had been sick for some days before he passed away on Wednesday morning at the Federal Medical Centre, Owo, Ondo State.

Multiple reports suggests that government activities were paralysed in Ondo State on Thursday following the announcement of the death of the state Commissioner for Health, Dr. Wahab Adegbenro.

The Commissioner for Information, Mr Donald Ojogo, also confirmed the development and said all the aides had begun to go for the test

However, the Chief Medical Director of the University of Medical Sciences Teaching Hospital, Ondo, Dr Oluwole Ige, who tested positive for the virus, was said to be receiving treatment.

A statement issued by the Press Officer of the hospital, Mr Adeeyo Babatunde, indicated that the CMD was responding to treatment.

In a related development, following the death of the Ondo State Commissioner for Health, the state government has declared Friday July 3, 2020 a work free day to honour the departed commissioner.

The state government also directed that all flags in the state must fly at half mast for seven days from Thursday, July 2, 2020.

The directive was contained in a statement on Thursday issued by the state Commissioner for Information, Mr Donald Ojogo.

Eunice Ortom, wife of Benue State governor, her son and some of her staff have tested positive for COVID-19

Nigeria’s debt portfolio of has risen to N28.63tn