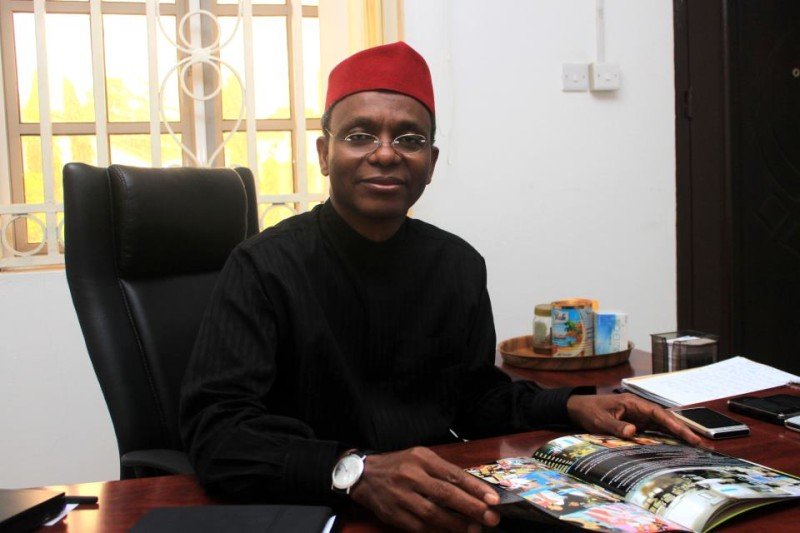 However, the ceremonial cutting of tape was done on his behalf by the Governors of Kogi State, Yahaya Bello and Kaduna State, Nasiru El-Rufai, who both cut the tape simultaneously at the Ajaokuta and Kaduna ends of the project.

He expressed government’s determination to continue to enhance the livelihood of its citizens.

Kaduna State Governor, Nasiru El-Rufai who was on ground at the flag off ceremony said the gas pipeline project would bring gas to Kaduna and Kano, and enable government build power station, fertilizer plant and Petro chemical plants.

He said the opportunities would be unlimited as it would enable government have gas that would be piped to people’s homes so that they could stop using wood for cooking.

El-Rufai mentioned that, the project would transform the lives of the people of Kaduna and also it’s economy while he expressed gratitude to the Nigerian government for seeing the project through.

However, Kogi State Governor, Yahya Bello thanked the Nigerian leader for airing the project in Kogi.

He appealed to the contracting firm to engage the youths of the State, whom he said have the needed skills to contribute in the execution of the contract.

The Minister of State for Petroleum Resources, Timipre Sylva while speaking said the gas pipeline construction was a transformational project which was good for the integration of the Country.

He stated that the project would cost 2.8 billion dollars and funded by China. The construction site is about 600 kilometres from the Southern region to the North.

Instrumental to the commencement

“We expect that along the corridor, other forms of investments will surface. Part of the project is the construction of power plant in Abuja and in Kano”.

Kyari said the completion of the project would boost the country’s domestic gas supply.

“The project will significantly curb gas flaring and improve ventilation in he oil producing Niger-Delta region of the country,” he said.

The flag-off of the 614 kilometres-long natural gas pipeline is Phase One of the Trans-Nigeria Gas Pipeline project, to be done on a build-and-transfer Public Private Partnership (PPP) basis.

The project, which is taking off after months of discussions in and out of the country, will boost domestic gas consumption, power generation, and industrialisation.

Speaking during the ceremony at Rigachikun in Igabi Local Government Area of Kaduna State, the governor said the 614km Ajaokuta-Kaduna-Kano project, will add 3,600MW of electricity to the grid when completed and also supply industrial clusters with constant power.

The proposed Ajaokuta, Kaduna-Kano pipeline, is a section of the Trans Nigeria gas pipeline with a capacity to transport about 2.2 bdt/d of gas.

The gas pipeline will originate from Ajaokuta transversing through Abuja, Niger, Kaduna and terminate at Kano.

Related Topics:El rufai
Up Next

NCAA bans use of private jets for charter operations