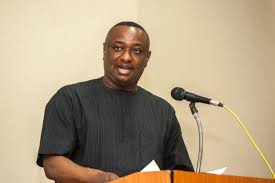 The meeting of the Joint Committee of the National Assembly on Employment and Labour with the minister of state for labour, Festus Keyamo on Tuesday ended in chaos as both parties reportedly exchanging words with the minister being walked out.

The meeting was aimed at discussing the progress of the planned employment of 774,000 Nigerians by the federal government.

The National Assembly had in the 2020 budget appropriated N52 billion for the Special Public Works Programme aimed at employing 774,000 citizens, a thousand from each of the 774 Local Government Areas in the country.

During the meeting, members of the committee, headed by Godiya Akwashiki, asked the Director-General of the National Directorate of Employment (NDE), Nasiru Ladan, to explain the composition of a 20-member committee inaugurated on Monday by the ministry for the implementation of the programme.

In his response, Mr Ladan noted that he was aware of only eight members of the committee and asked the lawmakers to seek further clarification from Mr Keyamo.

Mr Festus Keyamo was asked for further clarification, and said he “wondered if he was being accused of hijacking the programme from the NDE and whether the lawmakers were alleging the committee composition was lopsided.”

The minister’s outburst angered the lawmakers who asked that he apologise for his behaviour.

Mr Keyamo refused to apologise and insisted that he had done nothing wrong. He said he had been denied the opportunity to respond to their allegations and threatened to walk out of the meeting.

The chaos intensified and lawmakers asked that journalists leave for an executive session with the minister.

But Mr Keyamo firmly rejected the demand, insisting that having been openly accused and disgraced, the cameras should remain in the room. The lawmakers responded in anger, shouting back at the minister to leave if he wanted.

They still want to hijack the entire the programme, taking over the power of the president in the process,” Mr Keyamo told journalists after the session.

On the 28th May, Festus Keyamo had unveiled details of the federal government’s plan to employ at least 1,000 persons from each of the 774 local government areas in the country.

The initiative, he said, will start October 1 and each beneficiary will be paid N20,000 monthly to carry out public works.

““Having reviewed all the recommendations of this Inter-ministerial Committee, I believe that the selection of the beneficiaries and projects should be a local affair and not be done from a room in Abuja. Consequently, in line with Section 16(1) of the N.D.E Act, I have decided to constitute special committees in each State of the Federation for the purpose of deliberating, selecting and recommending to my office the names of the 1,000 persons from each of the Local Government Areas in the States to be engaged for this programme. The minister explained