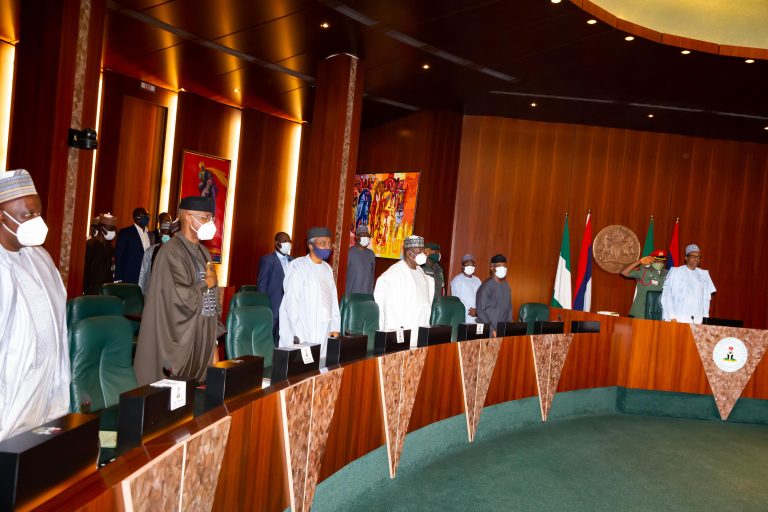 The Presidency has responded to criticisms of President Muhammadu Buhari for holding a political meeting in the chamber of the Federal Executive Council (FEC) at the State House in Abuja.

In a statement on Sunday, Mr Garba Shehu insisted that the meeting of the National Executive Committee of the All Progressives Congress (APC) did not take place at the chamber.

The President’s Senior Special Assistant on Media Publicity stressed that although the meeting was virtual, President Buhari has the right to convene a meeting in any part of the Presidential Villa.

He said, “It is necessary that we put records in their correct perspective concerning the recent meeting held by the National Executive Committee of the All Progressives Congress, APC, which has, unfortunately, drawn criticism due to lack of understanding.

“The stubborn opinion held by the critics of the administration is that President Muhammadu Buhari had called a political meeting in the “hallowed” chamber of the Federal Executive Council, as if there is a law that says the President is barred from holding meetings in certain sections of the vast Presidential Villa.”

“Since the President lives in the Villa, no one can, legally speaking, choose or dictate to him where he can sit to hold meetings. So, what is wrong in the President presenting himself before a camera and a TV screen in a digital conference at a given location within the Villa?

“Just for the sake of the argument, this meeting, we say emphatically, was not convened at the Council Chamber. It was virtual, not a physical meeting,” Shehu stated.

He explained that the meeting held virtually to observe social distancing in view of health concerns, noting that the conference hall of the party was small to accommodate all the participants.

According to Shehu, President Buhari is billed to address the meeting from one of his offices and he chose the Council Chamber where the digital facilities are located.

He added that most of the NEC members, state party leaders, and members of the National Assembly were all linked through video conference calls.

The President’s aide, however, said, “Yes, it is true that governors and leaders of the National Assembly joined the President from the chamber from where he spoke; but the larger body of the members in attendance were all connected via video calls.

“Do not forget that these are not the normal times in view of the COVID-19 circumstances in which we have found ourselves. President Buhari placed health and safety above courtesy to the party by not going to its headquarters.”

Shehu insisted that the President made a wise decision because he wanted to curtail the spread of coronavirus (COVID-19).

The APC NEC meeting had sparked criticism from various individuals and groups, including the Peoples Democratic Party (PDP).

In a statement on Friday, the opposition party accused President Buhari of violating his oath of office by using the FEC Chambers and government resources to conduct the affairs of his party.

It described the meeting as “shameful” and “a further manifestation of the level of impunity” by the present administration.

“We want to take over to move Nigeria forward,” Rivers State Governor Wike