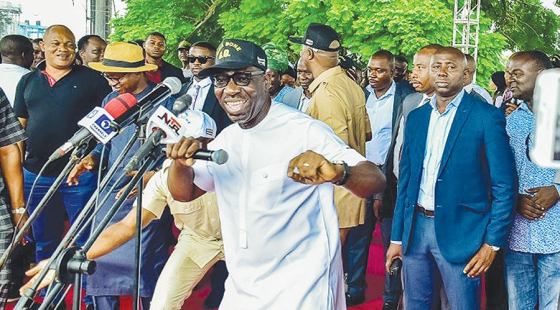 The court case seeking to stop him has been struck out after out of court settlement in Port Harcourt on Wednesday, June 24, 2020.

The Federal High Court sitting in Port Harcourt struck out the suit filed by Omoregie Ogbeide-Ihama stopping Gov Obaseki from participating in the tommorow’s governorship primary elections of the PDP in Edo State.

One of the counsels for the plaintiff, D. C. Denwigwe, (SAN) had upon court resumption of hearing in an oral application informed the court that the parties in the suit have resolved their differences.

Denwigwe told the court that their clients have settled and have asked their counsels to withdraw the case.

He expressed apologies to the court for the inconveniences and urged it to strike out the matter based on the oral prayers.

However, the presiding Judge, E. O. Obile, struck out the matter follow the submission of the counsels.

Justice Obile in his ruling commended the counsels for resolving the matter.