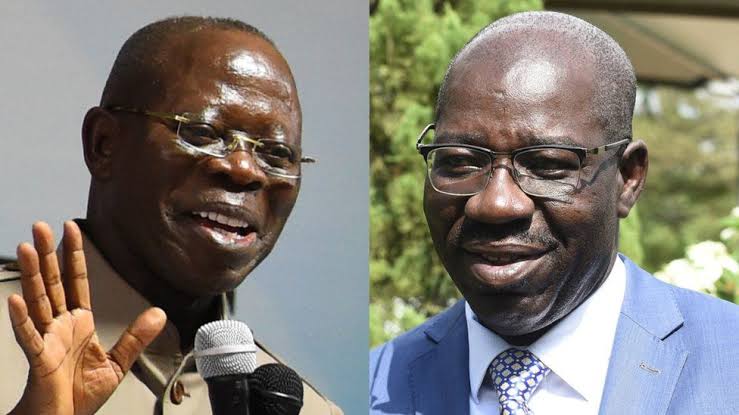 One of the many contraptions that have defied contrivance and evolution in Nigeria is our politics. We still practise the basest, vilest and crudest kind of politics. In fact, there is a more transparent and disciplined political system in the animal kingdom than there is in our country.

Some studies have shown that baboons have an ordered democratic system – not based on social dominance but on purpose, merit and importance. Baboons will not follow any member of their troupe based on his rank or social significance but squarely on if that member has direction and purpose.

Also, honey bees have one of the most organised social systems. They hold the freest, fairest and most transparent elections. I think we have to start learning from animals – deploying a bit of biology in our politics. It is that bad.

The open scrimmage between Godwin Obaseki, governor of Edo, and Adams Oshiomhole, national chairman of the APC, foregrounds the filthiness and anachronism of our politics. In the build-up to the 2016 governorship election in Edo, Oshiomhole eulogised Obaseki as having the ‘’brains and creativity’’ to lead the state while suggesting that the governor’s opponent, Osagie Ize-Iyamu, who was in the PDP at the time, could not be trusted with public funds.

Speaking on his now canonised candidate (Ize-Iyamu) at the time, the APC national chairman said: “We kept him away, nothing near government circle, no access to public fund.”

Now, because of his rift with Obaseki, Oshiomhole is angling to install a man whom he said cannot be trusted with public funds as the governor of Edo. You cannot find such ludicrosity even in the animal kingdom. What is at play here is

Oshiomhole’s vulgar interest – obviously. He wants to rule by proxy and of course, relish the benefits of puppeteering.

But where is the interest of the Edo people in all of these? Has the governor failed in his duties? Has he failed on his promises to the people? Has he misused public funds? Are the social and economic indices of the state better or worse than they were four years ago? I believe these gradients should be the basis on which Obaseki is assessed.

Really, Obaseki played into the jaws of the kraken. I believe he knew what he was getting into. In our quotidian politics of interest dealing, he must have made some concessions to his promoter but reneged on them after getting into office. Though it takes courage to back out of any deal that is not in the interest of the people, weaselling out of a supposed agreement accents a flaw in the character of the defaulter.

Obaseki alleged that Oshiomhole pencilled down names of those he must appoint as commissioners in his living room – but he rejected them. Though, the APC national chairman denied the allegation, he admitted he had recommended one or two names to be appointed as commissioners. That fact is there was a covenant, and the deal broke. Nigeria’s classical primitive politics!

In 2016, the APC rubber-stamped the candidature of Obaseki, but in 2020, the same party has disqualified him from vying for its ticket in the Edo governorship primary election over ‘’inconsistencies in his academic credentials’’. Why now? This clearly limns the APC has a party that is vacant of principles, integrity and utility. There could be nothing more fatally astounding.

Over the years, I have watched the APC course from bad to worse, and now to the utterly egregious. Some of the party’s chieftains have blamed the recent nose-dive on Oshiomhole. They may not be entirely wrong. The APC has greatly unravelled. It has become the asymptote of Nigeria’s primitive club of pillagers.

The APC could survive Oshiomhole’s despoiling artifices as a party, but it cannot regain itself and the purpose it once held. Oshiomhole could leave the APC in the same state as he left the NLC – broken, battered and peripheral.

As 2023 approaches, Nigerians will have to look beyond the two wagons of despoilers – the PDP and the APC – if practicable. We are in dire need of political parties that will run on ideologies and principles; that will fecundate political discourse with ideals and real issues not with primitive and base themes that stunt our political growth.

Intellectuals, professionals, particularly those with the interest to serve the people, must get involved in politics; it should not be left for certificate forgers, area boys and cultists. How can our primitive politics evolve when it is run by primitives?