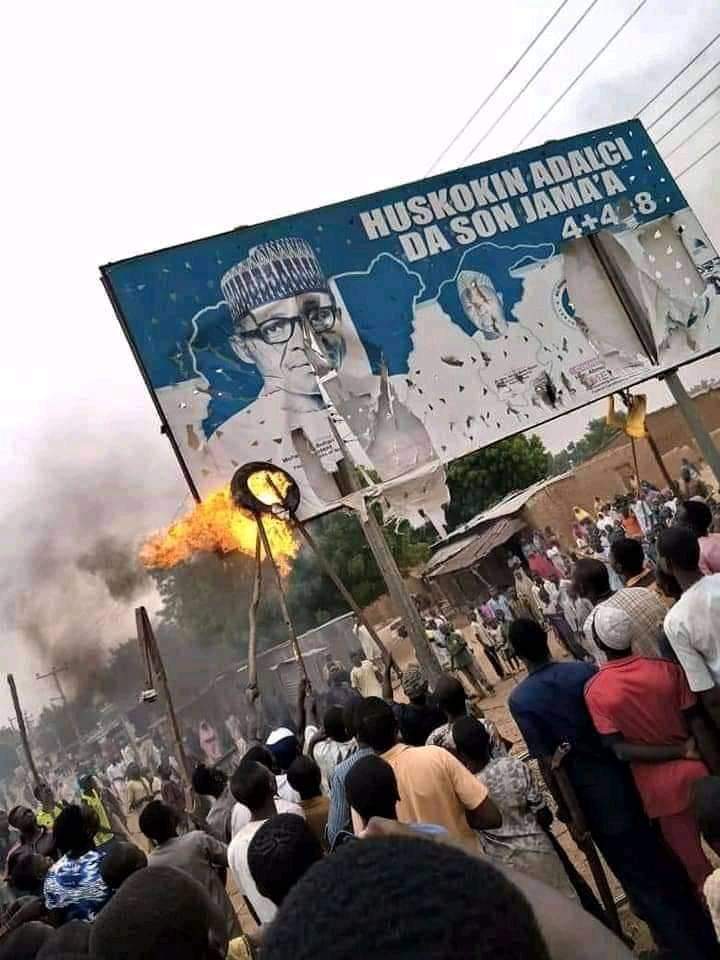 Protesters in Yantumaki town, Damusa Local Government Area of Katsina State, on Tuesday burnt down a campaign billboard of the All Progressives Congress with the pictures of the President Muhammadu Buhari, and Governor Aminu Masari.

NewsWireNGR had Tuesday, reported that protesters in Katsina, President Muhammadu Buhari’s hometown took to the streets, chanting war songs and turning back motorists in over insecurity in the state.

But it wasn’t just the regular protest, this time, they burnt billboard advertising President Buhari, – The billboard is along the highway leading to the town.

This is not the first time the people are protesting, the recent protest is as a result of the kidnap of a health worker, Alhaji Mansir Yusuf, and his daughter by bandits around 1am on Tuesday.

“The command and indeed other security agencies are not leaving any stone unturned to ensure those responsible for the two recent crimes (the killing of the district head and Tuesday abduction) are brought to book.

“The CP has detailed Area Commander Dutsinma to relocate to Yantumaki as more senior officers are deployed in the area to take care of the situation.”

Meanwhile, the Chairman of the Peoples Democratic Party in the state,Alhaji Salisu Majigiri,declared that the Yantumaki protest an indication of the loss of confidence by the people in the APC government.

He said, “The government needs to wake up to its responsibility. Security and welfare of people should be the responsibilities of any serious government but which the state-led APC has failed to address.

“The issue of insecurity is not only in the Danmusa LGA, it is in all the eight frontline local government areas in the state.

“The so-called peace pact with the bandits collapsed over a year ago. Granting amnesty is not new but it must be robustly done.”

Neither the APC chairman in the state, Alhaji Shittu, Shittu, nor the state publicity secretary, Abu Danmusa, picked their calls or replied the SMS sent to them, for their reactions.

The special adviser to the governor on security, Ahmad Katsina, said he was in  transit and could not comment due to network challenges.

His reply to the SMS sent to him read, “I am sorry, I am on the road now and could not comment because of network challenges.”

“The road infrastructure dearly needed to link and open up the communities to access the huge agricultural produce coming from the region yearly, is not in place, thus cutting the communities off.

“It is the responsibility of government to provide such basic infrastructure in communities such as those unfortunate towns, villages and hamlets that are close to the Sambisa forest.”