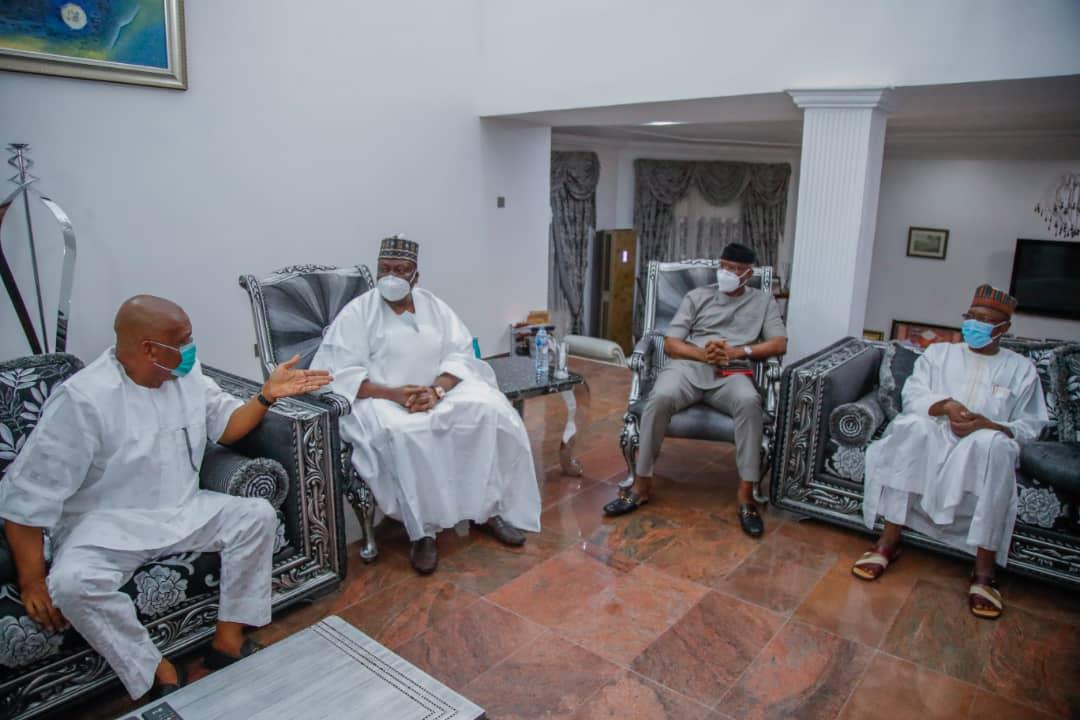 The former governor of Abia State arrived at the Senate wing of the nation’s parliament at exactly 9:00 am, 9th June, 2020.

He exchanged pleasantries with his colleagues and acknowledged greetings from legislative staff and security operatives.

Meanwhile, TheCable Newspaper is reporting that, the principal officers of the house, who were led by Idris Wase, the deputy speaker, told on a solidarity visit to Kalu at his Abuja residence on Monday said their visit was to sympathise with him on his experience in prison.

Wase told Kalu that he should see his conviction and jail term is a badge of honour for politicians.

“We are here to sympathise with you on what happened and your incarceration. As a politician, I want you to take it as one of those things,” he said.

“First, we congratulate you and urge you to put everything before God and believe it is part of destiny. My leader, the late Chief Solomon Lar, told me not to fear, as a politician, to go to prison.

“He told me that going to prison is a badge of honour. If you are a good politician, you should be willing to taste prison experience because it will come to you in very many dimensions.

“That happened to us sometime in the past when we were being chased and humiliated, and he asked us to be resolute and face the issues as they were. He reminded us of how he was sentenced to over 90 to 150 years in prison. He told us that as leaders, there is always a judgement that could be passed.

NewsWireNGR recalls that, Kalu was convicted by the Lagos Division of the Federal High Court on Thursday, December 5, 2019 and sentenced to 12 years in prison for N7.65 billion fraud. He was convicted for defrauding the government of Abia State where he was a governor for 8 years using his company, Slok Nigeria Limited. Days after the court ordered the forfeiture of the company, Nigeria anti graft agency, Ecominic and Financial Crimes Commission, EFCC commenced the process of winding down Slok Nigeria Limited including The Sun Publishing Ltd which was not part of the charges. Consequently, The Sun Publishing Ltd approached a high Court in Lagos for interpretation of the judgment that convicted Kalu and Slok Nigeria Limited asking the court to compel EFCC to stay away from The Sun Publishing Ltd since it was not part of the court case.He was held in custody at the Ikoyi prisons in Lagos.

On Friday,8 May, 2020, the Supreme Court of Nigeria ruled that his trial was wrongly conducted and released him from prison while ordering a retrial.

On Friday morning, the Supreme Court deemed Mr Kalu’s conviction inappropriate and ordered a retrial of the case, according to multiple media reports out of the court.

Related Topics:corruptionNigerian senate
Up Next