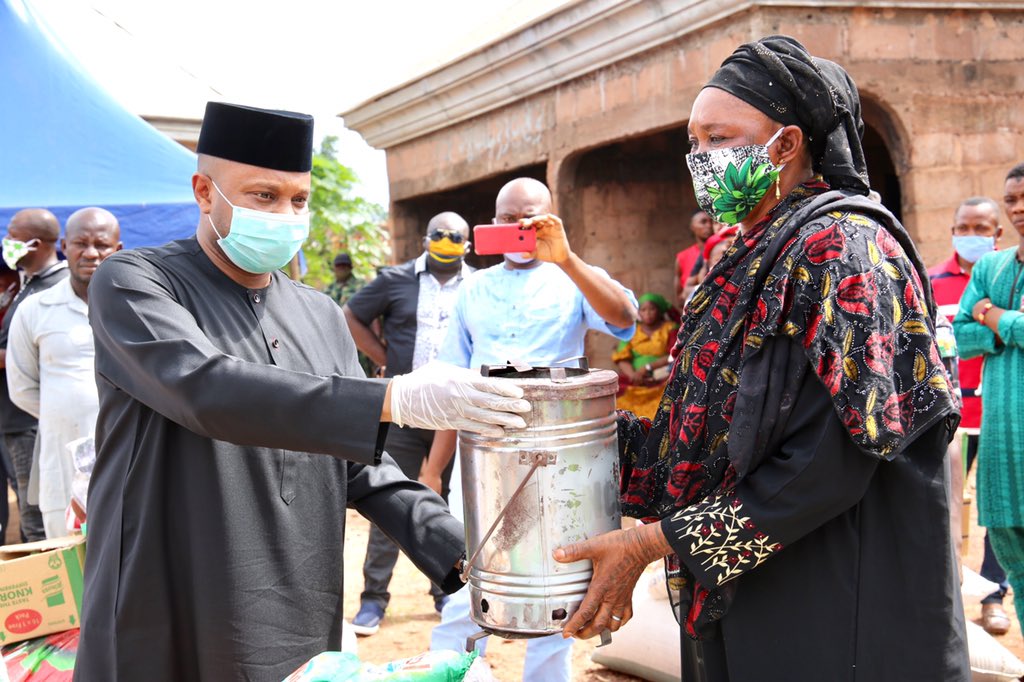 In the bid to cushion the effects of the Corona crisis in Nigeria, the National Commission for Refugees, Migrants and Internally Displaced Persons NCFRMI has stepped up its interventions in offering palliatives to Persons of Concern in Nigeria. The states to recently benefit are Benue, Katsina, Cross Rivers, and Kogi.

For years, the top-rate Commission has been alleviating the burden of malnutrition and diseases among the at-risk population in the country. So, it was only natural for the agency to bridge the “hunger and discomfort” gap created by the killer epidemic.

Nestled in the Southern part of Nigeria are Cross River and Akwa Ibom states, which are homes to over 2000 Internally Displaced Persons. The number of IDPs in these states was an indicator that there was a need for an intervention. The NCFRMI, led by Senator Basheer Garba Mohammed, channeled palliatives in the form of food and non-food items to those affected the most.

The food items distributed were 340 bags of Garri and beans, respectively. Also, non-food items such as face masks and sanitation supplies were presented to the beneficiaries. The communities that benefited from this palliatives to cushion the effect of the pandemic were Etun Local Government in Cross River State and Eket Local Government in Akwa Ibom.

Recent developments have affected Benue State as the food basket of the nation the state is host to over 100,000 vulnerable persons who can barely get enough food to survive. The IDPs were rendered homeless by herdsmen attacks and sectarian violence over the years. Covid-19 has worsened the living conditions of the vulnerable population in the State. During the lockdown, the Federal Commissioner of the commission, Senator Basheer Garba Mohammed, presented relief materials to the IDPs at the Benue State Emergency Management Agency in Makurdi.

Supply lines have been adversely affected by the various level of lockdowns in the country, Kogi State inclusive. The state has also benefitted from the support from the Commission. This is especially as the state is highly susceptible to flooding. The added effect of the lockdown will only aggravate the living conditions of Persons of Concern. For this reason, amongst others, 3 LGAs received for the intervention presented by the commission. Edible and non-edible materials were presented to Ibaji, Bassa, and Igalamela Local Government Areas, all situated at the banks of the River Niger. Edible products that were handed out included numerous bags of 50kg rice and 1000kg beans, grains such as maize and millet, seasoning cubes, salt, red oil, and tomato paste. The beneficiaries also received non- edible essentials such as blankets, mats, and medical supplies home.

Katsina State, has been a hotspot of terrorist attacks; to ease the after effects of the violence, which could have been worsened by a life-threatening crisis like the Corona pandemic, made the Commission to offer support. A total number of 42,000 persons benefitted from the relief items presented by the agency.

On the approval of the Federal Commissioner of the National Commission for Refugees, Migrants and Internally Displaced Persons, Senator Garba Basheer Mohammed, seven communities in the affected Batsari LGA of Katsina, were beneficiaries of relief materials. Some of the food products given were grains, sanitary staples, and household products. Before offering help to the vulnerable group, the Senator had paid a courtesy visit to the Governor of Katsina State, Governor Aminu Bello Masari.

On 29th of May, 2020, against the backdrop of the much-talked-about Coronavirus and its resulting hardship on the at-risk population in Nigeria, the NCFRMI revisited Cross Rivers State, to attend to the needs of 1760 refugees in Aninegeje and Ekon Annakun communities.

Senator Basheer Garba Mohammed continues to traverse the country bringing succor to vulnerable persons in a time of a global pandemic. This acts goes above and beyond the call of duty, the act of personal sacrifice has not gone unnoticed. This selflessness and more is what Nigeria needs at the moment.

Innovation in Times of Crisis: How a Nigerian Inventor is taking the lead