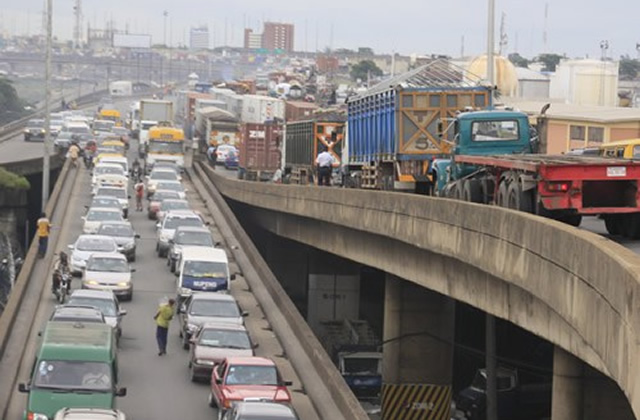 The Lagos State Government has announced a plan to effect partial closure of the Marine Beach Bridge, Apapa, to vehicular movement,  from May 27 to Oct. 21.

The Lagos State Government on Sunday declared an arrangement to effect partial closure of the Marine Beach Bridge, Apapa, to vehicular movement,  from May 27 to Oct. 21.

The arrangement disclosure was made by the state Commissioner for Transportation, Dr. Frederic Oladeinde,  in a statement in Lagos.

He said that the conclusion is to empower the fix of the scaffold which, he stated, was long overdue.

“The repair by the Federal Ministry of Works is long overdue and is vital for the safety of the people of Lagos State, especially motorists that ply the bridge to access different parts of the state.

“Necessary palliative works have been carried out on all alternative routes around the construction site to make them to be in good condition to ease movement during the construction period.

“The repair work, which comprises bearing and expansion joint replacement, is planned to be executed in two phases, with each phase focusing on one lane of the bridge at a time.

” The first phase will be handling the lane inbound Apapa while the second phase will be designated to work on the lane that conveys vehicles outside the axis,” he said.

Oladeinde said that the partial closure of the bridge by Total Gas, inward Apapa, would last for five months.

The commissioner said that the repair was in line with the vision of providing a seamless transportation system in the metropolis.

According to him, motorists inward Wharf Road would be diverted to the other section of the bridge outward Apapa.

Oladeinde said that a contraflow of 200 meters had been designed for vehicles to realign with a proper direction inward Ajegunle or Wharf Road, Apapa.

He said that motorists descending to Total Gas would drive without any hindrance.

The commissioner said that operatives of the Lagos State Traffic Management Authority would be stationed at the construction locations to ease traffic.

Oladeinde appealed to motorists and residents of the area to cooperate with traffic management agencies deployed to the areas.

“The state government expresses its commitment to providing a transportation system that will meet the needs of a larger population in an emerging smart city,” he said.

Report shows that the Public Affairs Unit of the State Ministry of Transportation (MOT) had on March 27 announced the closure of the Marine Bridge, partially from March 28 to Aug. 15 for repair.

However, on March 28, the ministry suspended the plan due to the COVID-19 pandemic.