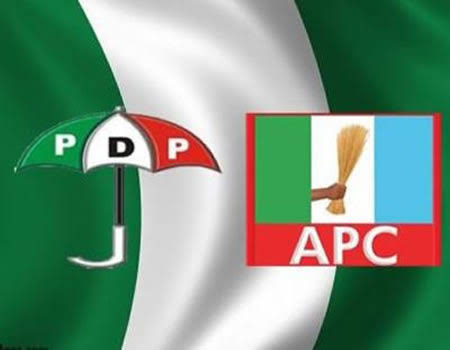 The United States of America, a country that practice the presidential system of government (same as Nigeria), has her political activities characterized with different political parties (approximately 5) but by de-facto, just two exists and they are regarded as the major political parties; REPUBLICAN and DEMOCRATIC PARTY.

Albeit, some other political parties still exist (Libertarian, Green Party and constitution party) but the popularity and dominance of the first two made it seem like a two party system, just like Nigeria’s ALL PROGRESSIVES CONGRESS (APC) and PEOPLE’S DEMOCRATIC PARTY (PDP).

With a similarity of the de-facto two-party system between Nigeria and the United States of America, there is a very sharp contrast in both countries political ideologies. While the former is dominated with politicians and political parties with little or no ideology, the latter has politicians and political parties strictly adhering to their ideologies.
According to Morris Berman, “an idea is something you have while ideology is something that has you”.

In the United States of America , (Since the 1930s) the Democrats positioned themselves more towards liberalism while the conservatives increasingly dominated the Republican Party.

However, new electorate coalitions emerged during the latter half of the 20th century, with the Republicans (conservative ideology) becoming dominant in the South, rural areas, and suburbs; while the Democrats on the other hand (liberal ideology) increasingly started to rely on a coalition of (black) African-Americans, Hispanics and white urban progressives.

In this case one eventually becomes the Majority while the other becomes the Minority after election into various political offices as in the case of Nigeria. The APC is currently the majority party, while the PDP retains the minority leader.

Over the years, Nigeria Politicians and Political Parties have found it very easy and convenient to move from one Political Party to another without any ideology or principle as long as their current Political Party is no longer rewarding them or “serving their pocket” as widely said. This act of “carpet-crossing” is very inimical to the growth of our democracy and governance as the politicians have turned it to a must-do, coupled with the juicy benefits that comes with aligning with the ruling Party, after decamping from the opposition Party.

It is important to know that these Politicians especially the Representatives both at the upper and lower legislative chambers in Nigeria do not put their constituents into consideration and consultation before defecting to their “anointed” political parties, hitherto these were the people that voted them into their various offices and by virtue of the constitution and voting right, they are accountable to these set of people that form their constituents.

This would probably be a topic of discourse for a later date.

Back to the concept of Ideology, it can be described as a system of ideas and ideals, especially one that forms the basis of economic or political policy.

A popular example are the Capitalism and Socialism (policy), which falls under the Economic ideology. Nigeria Politicians and Political Parties should have principles and motives guiding their activities, for example the Action Group (AG) founded by the late Obafemi Awolowo on the 21st of March, 1951 in Nigeria with his like-minds (Anthony Enahoro, Bola Ige among others) had their ideology based on some core principles; Social democracy/ Democratic

Socialism popularly regarded as “AWOISM”. This birthed their manifesto that includes providing free education, infrastructure, free and accessible healthcare among others and they followed it to the latter at the defunct Western Region.

Hitherto, these men and women ensured they had their manifesto tied around their ideologies and principles, it was easy to figure out your area of interest and align with it. In some parts of the world, Political leaders and politicians abide by their party ideologies (strictly). Andrew Sullivan; a political commentator once asked “How can you tell them a political ideology has become the equivalent of a religion?”(in America)

In recent times, things have changed, these set of 20/21st century politicians/political ideology is to take over power and enrich themselves and close associates to the detriment of the masses. They barely go by the ideologies of their founding Fathers, including the so-called Party Chieftains that had the privilege of directly learning under the tutelage of those heroes that championed the Nigeria Freedom and modern Democracy.

Recently, the APC had an internal imbroglio shortly after the conclusion of their ward and state congresses respectively, some aggrieved party “big-wigs” felt they were being side-lined by those loyal to the Presidency, thereby taking over the party structure built by them, from them.

This conundrum lingered on for a while shortly before the 2019 general election, the two major political parties suffered some set backs as some of their big-wigs defected to their respective opposition camps.

They simply lacked ideology and guiding principles.
It is high time the electorate and entire populace started questioning these politicians and political parties on their ideology and manifestoes to avoid clash of interest whereby an individual votes for an APC candidate and at the end of the day, he/she decides to beat the gun and run to the PDP or vice versa.

We need to shun dirty politics and embrace the ways our founding fathers played politics, we have to adopt issue based politics that address the current happenings in our society, filter those policies and ideologies that are in the best interest of the populace and in turn support those that would bring governance directly to the electorate as expected.

Aluko Ahmad, a Corp member at the Federal Capital Territory writes from Abuja.

COVID-19: 5 Key Steps To Consider As Nigeria Begins The Process Of Lifting The Lockdown