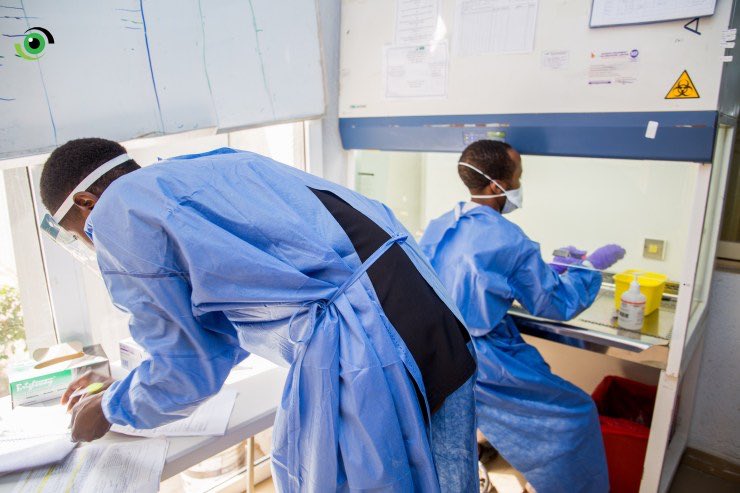 The Private sector-led Coalition Against COVID-19 (CACOVID) has ordered for 250,000 supplies for tests and another 150,000 extraction kits to fast-track molecular testing for the deadly coronavirus, noting that the reality of the situation at hand was such that efforts must be put together with no stone left unturned in dealing with the scourge.

The coalition also disclosed that no less than 1.7 million households would benefit from its food relief package as part of complementary efforts to help alleviate the effects of the lockdown and restrictions adopted by governments across the nation.

Briefing newsmen in Lagos on the group’s activities in helping the Federal Government halt the spread of the virus, leaders of CACOVID stated that the coalition has set up isolation centers in five states of Lagos, Kano, Rivers, Borno and Enugu as well as FCT, while renovations of hospitals and medical supplies are being carried out in other states.

Chief Executive Officer of Aliko Dangote Foundation (ADF), Zouera Youssoufou explained that all the partners in CACOVID are ready to roll out in all parts of the country having commenced building and equipping of isolation centers in some states.

According to her, there are currently three testing platforms for molecular testing in Nigeria, one of which is the “Open PCR machines”, which the Coalition has ordered for 10 units, with eight laboratories certified to conduct COVID-19 tests.

Ms. Youssoufou said, “Open PCR machine is currently the standard platform. Eight labs in Nigeria are certified to conduct COVID-19 testing; 10 new PCR machines and 150,000 extraction kits have been ordered. The other is Roche Cobus Platform with 6 Machines in Nigeria, each capable of testing 960 tests at a time. Nigeria was on track to receive 38,000 but we have ordered 250,000. 10,000 tests ordered by UNICEF have arrived on Thursday, April 16.

“We also have Cepheid Gene Expert Machines – there are 400 machines installed in the country. 250 are expected to be functional with trained lab technicians. Cepheid has developed a COVID-19 testing cartridge that has received FDA approval, and will begin shipping to Africa in two weeks. We have ordered 250,000 cartridges and expect shipment receipt in two weeks.”

In his remarks, Group Managing Director of Access Bank Plc, Mr. Herbert Wigwe, said the Coalition right from the onset knew the fight against coronavirus was not going to be easy but would require collaborative efforts of all.

He said the CACOVID-19 is approaching the fight against the virus from three levels, “One, it was clear from beginning that no one institution can go it alone, so we solicit everybody’s cooperation in tackling this scourge. Two, while several measures are being taken to stop the spread, including lockdowns, restriction, social distancing, there is the need to address the hunger. How do we cater for the feeding needs of the people if these measures are to be effective?”

Wigwe explained that the third level was the thought leadership aspect of the plan which is to tackle the post-pandemic aspect. According to him, “a lot of businesses have been badly affected and economies have been disrupted. How do we get them back to life after we might have defeated the coronavirus?”

The Access Bank GMD explained the modalities to be adopted to get the food relief materials to the targeted households, pointing out that it would be done from the bottom of the pyramid, which is the 774 local government areas where the CACOVID partners would be assigned to deliver the materials.

He said he was optimistic that the food relief materials would reach all intended beneficiaries because, according to him, it was a path that has already been trodden by Aliko Dangote Foundation, which has been distributing foods to the vulnerable in the states and has been achieving results.

Also, responding during the briefing, the Chief Executive Officer, MTN Nigeria, Mr. Ferdi Moolman urged other private sector organisations which are yet to identify with CACOVID in the onerous task to join hands and make their modest contributions.

Justifying why no organisation could afford to stay aloof, Mr. Moolman said the whole world is not at peace presently and every nation is on its own fighting the battle of COVID-19.