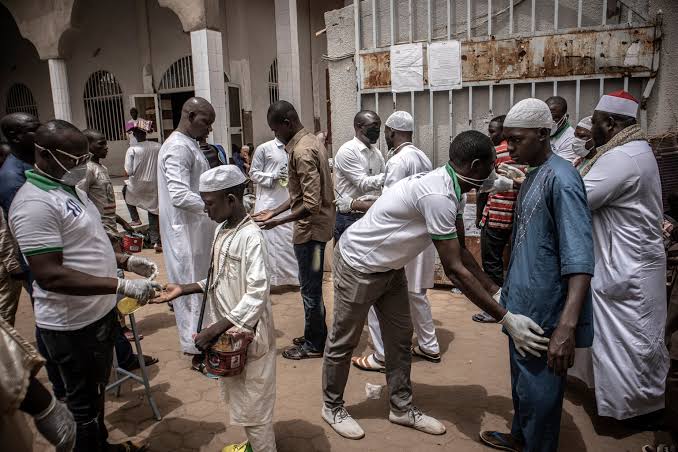 The key angle in this conversation is that the disorganised and poorly structured nature of the Nigerian society means that secondary and indirect waves of impact tend to hit more than the primary and direct waves.

This has come up again in relation to the Coronavirus lockdown situation. We have had more Nigerian killed by security personnel trying to enforce lockdowns and hoodlums taking advantage of the lockdown than we have had people actually killed by the disease itself.

Our underfunded and fatigued security personnel predictably, haven’t been able to curtail rising disruptions to law and order in certain parts of the country.

Lagos and Ogun States quickly come to mind. On April 11th, the border towns of Lagos and Ogun States were hit with an apparently coordinated wave of armed robbery attacks from armed cults who move in groups of 50s and 100s to unnerve the residents and discourage reprisal. Social Media was awash with pictures and videos of 24hour vigilante actions undertaken by residents of towns in Alimosho, Ifako-Ijaiye, Agbado, Abule-Egba, Meiran, Alagbado, Ifo and others.

This new method of armed robbery which has been noted even in parts of Abuja prior to the pandemic has been adopted by robbery gangs to take on high density populated areas and overwhelm security personnel.

These attacks are starting at the fringes but are slowly spreading inwards. They have been partly attributed to poor people losing income due to the shutdown and while this angle has some value, it doesn’t in any way explain the premeditation, networking, and coordination required to stage attacks in over 13 different areas with the use of thousands of young violent cultists.

In Abuja, indigent Northern boys loaded themselves in trucks in large numbers on the second day of the lockdown and exited to neighbouring states. They live from day to day and cannot survive a lockdown as many don’t have where to be locked down in. As more states shut down, what next?

Is Nigeria optimising the lockdown?

There is a dire need to improve our testing capacity. At last count as presented by The Cable NG, Nigeria with an estimated population of 201 million has carried out 5000 tests. Ghana with an estimated population of 28.8 million and South Africa with 58.6 million have carried out 37,405 and 75,053 tests respectively. Simply put, Nigeria’s testing capacity is abysmally low and we are not carrying out nearly enough tests. Scaling up testing is imperative.

Containment in the lockdown. Activities in suburbs in all states with an enforced lockdown order in Nigeria show that the lockdown is not as effective as expected. How long before these neighbourhood gatherings turn to major super spreading events? While the nation is at a standstill especially on the economic front which will have far reaching implications, COVID-19 is highly likely to still be in motion. Must businesses and work have stopped but humans haven’t; humans spread the virus.

Preparedness. Sans Lagos, COVID-19 centres in Nigerian states are clearly not sufficient for a pandemic level influx of patients. This should be a window to make key possible improvements to the health sector for the tsunami ahead.

A prolonged lockdown and Nigeria’s reality

Maintaining order in a lockdown situation is tricky. The unrest is being blamed on poverty but it’s not that straightforward. The scale of the wave of attacks experienced over the last two days shows that we are dealing with already existent and drilled cults and militias taking advantage of lockdowns to enrich themselves.
Prior to COVID-19, the most likely root to the final collapse of the Nigerian state was the growing numbers of cults and militias especially ethnic militias rising from weaponised violence and growing vigilantes formed to combat ethnic cleansing in the face of security gaps in the nation. Cults who have successfully weaponised and traded violence are the first to take advantage of the COVID-19 situation in South West Nigeria.

The Southwest has had a growing cultism problem. Policy failures, unemployment, and poor education have worked hand-in-hand to leave millions of young people unemployed and poor. Some of these young people have tried to find solutions and community in gangs and cults. The shocking unemployment and poverty rates have made things worse but we do have to look at the issue of leadership.

The cold truth is that the SW elite like the elite everywhere else in Nigeria elite have separated themselves from the masses and abandoned them and what usually follows is you have Hoodlums stepping into the leadership gap.
For decades, Southwest youth were largely submissive because there was a regional social contract of sorts that made it clear that good behaviour and academic or technical competence would be rewarded EVEN if you were from the poorest of backgrounds.

The South West political elite largely had a good relationship with the South West industrial and corporate elite and they worked together to create a stream of opportunities for their young people. This helped maintain order and cohesion. People agreed to submit to group goals because they felt that they were adequately considered by the group. It allowed the SW to move fluidly as a unit. The political elite played their part by not being too flamboyant and maintained an emotional connection to the lower classes. They were approachable and within reach.

Post 1999 this started changing as civilian political players started tapping into the culture and financial siphoning systems left in place by the military administrators of the states.

Young and middle-aged people started seeing those who committed to academic success abandoned and poor. They saw badly-behaved young people who delivered channels of violence to politicians being rewarded with wealth, status and power.
Lately, the population growth and accompanying dearth of openings have had the elite focusing the opportunity stream on their own families.

The Masses now feel abandoned. They don’t have the motivation to behave. This is a nationwide problem manifesting

It is pertinent to note that the lower classes only align with the rules of civility based on the promise that the higher classes will provide opportunities for them.
That is how social contracts work. Once they feel abandoned, what they usually do is resort to violence.

The pattern and outcome of the elections in Nigeria with the 2019 elections being the peak have given the Nigerian Poor the impression that Violence is a legitimate currency in Nigeria.

In addition, Nigeria also has a gargantuan drug problem and this increased use of narcotics will be a trigger for an upsurge in the rates of violent crimes due to the way drug use affects behavioural restraints.

If unchecked, this might be the catalyst for a complete breakdown of Nigeria as we know it. The economy is not ready for the shock that will arise from an extended shutdown of multiple borders and our national economy.
There are concrete steps to take to ensure a brighter future for Nigeria or any future at all but the focus right now is surviving COVID-19 with as minimal damage as we can manage.

The points posited above point to two possibilities:

Why option 2? The first round of palliatives shared by the Federal and State governments of Nigeria show Nigeria cannot afford to cushion the effect of extreme steps towards curbing the spread of COVID-19 in Nigeria; and there isn’t more where that came from. A fragile state is once again at the brink but this is not the predictable brink we all envisaged. With or without an attempt at a lockdown, COVID-19 will run through a sizeable percentage of the populace and infection rates will eventually skyrocket. What do we have working for us? A high percentage of asymptomatic carriers and patients with mild symptoms and for now, few deaths.

What can Nigeria afford? Risking the entire system by adopting an approach used by developed countries and not tailored to our realities or relegating it to the health care sector and fighting the battle on that front?

None of these options are easy to take. We await the decision of the Federal Government of Nigeria.
The president of Nigeria will be addressing the nation at 7pm today.

Ndi Kato is a political analyst, an activist, Executive Director of Dinidari Foundation and convener of Abuja Discourse; a platform saddled with curating conversations towards policy and legislative solutions.

COVID-19 vs hunger virus: Buhari, lockdown is not sustainable