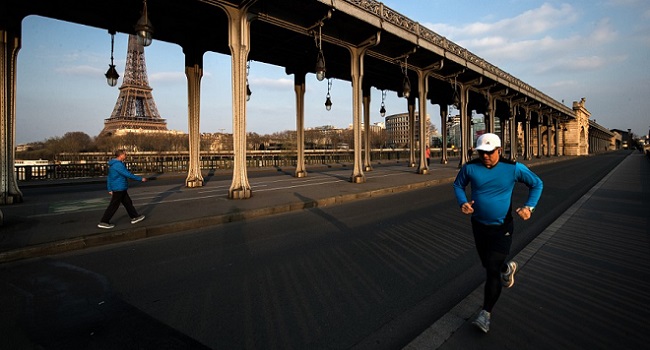 AFP reports that under nationwide confinement rules that came into force on March 17, people can leave their homes only for essential purposes, which had included a solo walk or run within one kilometre of their homes.

But as sunny days arrived over the weekend, large groups of Parisians were seen running, walking and congregating in groups, even as police issued fines for lockdown violations and hospitals struggled to cope with the influx of patients.

On Tuesday, as France entered its fourth week of lockdown, Paris toughened the confinement rules, announcing a ban on individual outdoor sports between the hours of 10:00 am and 07:00 pm starting Wednesday.

He said 478 people were admitted to intensive care in the period, a higher figure than in previous days.

“It is not over. Far from that. The path is long. The figures that I have announced show this,” the minister said, urging people to “stay at home and continue this confinement effort”.

Announcing the new measures for Paris, Mayor Anne Hidalgo and the capital’s police chief Didier Lallement said in a statement that “every excursion avoided aids the fight against the epidemic”.

On Monday, the mayor of Sceaux, a commune south of Paris, issued a decree obliging all residents over the age of 10 to cover their mouth and nose when leaving the home starting on Wednesday.

Those who do not have surgical masks must wear a homemade alternative or tie a scarf or bandanna around their face, otherwise they could be fined 38 euros ($41).

In a radio interview earlier on Tuesday, Hidalgo said she was not making masks obligatory although she did encourage everyone to cover their faces and noses.

The French government requisitioned all medical masks earlier in the outbreak for doctors and nurses.