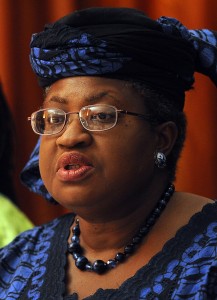 The 2020 celebration of the March 8 International Women’s Day in Nigeria had an added significance and flavour, as the country was awakened to the news of appointment of one of its highly valued daughters, Dr. Ngozi Okonjo-Iweala as a member of the South Africa’s Economic Advisory Council. Considering the sophistication and global standing of the economy of that sister African Country, most Nigerian women, enlightened enough to understand what was going on, shared a feeling of great euphoria.

Well, the appointment of this Nigerian woman to serve in a high position of trust in a kindred African country is not a total wonder to some of us who know a bit of her antecedence. As Nigeria’s Ambassador to Denmark in 2008, I was quite elated to have been invited to the Inauguration of the Danish Commission on Africa, a country that is the world’s 9th highest per capita income and top in global donor platform, only to find out that my country woman with her characteristic Ankara dress and headgear, was Co-Chairman of the body. As if that was not enough, l again met her at a function which I attended as Nigerian Ambassador to Norway in 2009, at which the country’s Minister of Finance made a presentation on its globally acclaimed Sovereign Wealth Fund. The fund was already over $400billion at the time and now its about $1 trillion. Dr. Okonjo-Iweala was again a Special Guest at the event and, later, she introduced same in Nigeria, after combating unimaginable negativism. Today, the Nigerian Sovereign Investment Authority (NSIA) is lodestar of Nigeria’s investment and future savings efforts.
As Federal Permanent Secretary for Water Resources, I visited Washington several times between 2010 – 2011, and watched “Madam Ngozi”, then Managing Director of the World Bank, preside over meetings unending, looking for money to modernize water infrastructure in places such as Lagos, Portharcourt, Kaduna, Cairo, Mombasa, and other African mega cities. In Washington, her schedule was crazy; covering from global macroeconomics to substantive development agenda issues, such as; attainment of the MDG goals, the precursor to the current 17 SDGs. There was obviously, virtually little time to spare for unproductive engagements, meetings or socializing. But on a few occasions, for example when we visited with then Governors Chibuike Amaechi, Kayode Fayemi and others in 2012, she obliged us audience and helped in no little ways push through funding water supply in both urban and rural towns around Nigeria.

As many Nigerians know, Dr. Okonjo-Iweala’s first and second “missionary journeys” to Nigeria as Minister of Finance, and later additionally “Co-ordinating Minister of the Economy” (CME), were resounding successes. Given that there are no perfect economic policies anywhere in the world, even with the American Treasury Department, the Federal Reserve or the British Chancellery of Exchequer or Germany’s BMF, etc, what she did in Nigeria was phenomenal. Year-on-year GDP growth of about 5% average was gladly bolstered by bountiful earnings from oil sales, averaging about $60. Job creation efforts under YouWin which was done with greatest knack for excellence and transparency, and the pursuit of fiscal regime, which was conservative and extra cautionary, were the hallmark of her times. The effort on curbing of waste and graft she amply elucidated in her two books “Fighting corruption is Dangerous” in 2018 as well as its 2012 precursor “Reforming the Unreformable”.

During her first “incarnation” under President Olusegun Obasanjo, Nigeria got substantial debt relief. This included: I) Paris Club where we obtained debt relief of about USD18billion and with that, fully exited that category of debt amounting to about USD30billion; II) Nigerian exited the London Club debt of about USD1.48billion – through debt buy-back operation (outright cash payment); III) And the nation exited the Promissory Notes liability of about USD0.0503billion – through cash payment.

Since leaving Government in 2015, like her workaholic erstwhile boss, Chief Olusegun Obasanjo, she has become more globally engaged and “oversubscribed”. She is Adviser to several multinational institutions and multi billion global funds. For example, she sits on the Boards of Standard Chartered Bank, Twitter, Global Alliance for Vaccines and Immunization (GAVI), which is African Union’s African Risk Capacity (ARC) – an innovative weather-based insurance mechanism for African countries.

For the completeness of our records, it would be useful to mention some of her previous engagements. She was also a Board member, Rockefeller Foundation Board, member, One Campaign, member, World Economic Forum Young Global Leaders, and University of Oxford’s Blavatnik School of Governments. Mrs Ngozi-Iweala was also at a time, member, the International Monetary and Finance Committee of the IMF (2003-2006 and 2011-2015), as well as a part of the United Nations’ Secretary General’s High-Level Panel on the Post-2015 Development Agenda that is 17 Sustainable Development Goals, the World Economic Forum Global Leadership Council on Transparency and Corruption, and also the Commission on World Growth, which is an assemblage of leading global economists.

The exciting part of the narrative is that, Madam Ngozi is simply a Nigerian or rather, “homebred girl”. She was born in the northern Delta State town of Ogwashi-Ukwu. Indeed, until his demise in September 2019, her father, Professor Chukwuka Okonjo was the Eze (King) of Ogwashi-Ukwu. Again, like most other young women in Nigeria, she was initially educated at home, especially the famous Queen’s School, Enugu which was established in 1954 and produced many great Nigerian women from that part of the country. Later on, she moved on to St. Anne’s School, Molete, Ibadan, and the International School Ibadan, as her Father, a Mathematician, became a Lecturer in Nigeria’s premier University of Ibadan. It was after this foundation at home, that she proceeded to Harvard University in the United Stated, graduating with a First Class in Economics in 1976. She continued her studies in similar ivy league schools, finishing in 1981 with a Ph.D. in Regional Economics and Development from the Massachusetts Institute of Technology.

In a previous edition in 2014, the prestigious Times and Forbes Magazines adjudged her one of the most “Influential and Powerful Women” in a male dominated world. This places her unarguably in contemporary times, about same pedestal with such amazons as; one-time US Foreign Secretary, Madelaine Albright, Former US First Lady, Michelle Obama, Former US Presidential Candidate, Hillary Clinton, Liberian President, Ellen Shileaf Johnson, German Chancellor, Angela Merkel, European Central Bank Boss, Christine Langarde.

No doubt, the cumulative impact of women to human civilization and global development in all spheres, in fair assessment, could match or even surpass that of men. This is if we specially look at bits and pieces of informal, micro and unrecorded human activities and some specific fields. Recently I had good reason to write about a greatly pan-female cabinet in Finland, a beautiful country, where I also served as Ambassador once upon a time. Interesting enough, the Prime Minister of that country and key portfolios as; Interior, Finance, Education and Environment are in the hands of women, mostly in mid 30s. This is same thing in New Zealand.

The question therefore, is when will men, especially in Africa and Nigeria in particular, give so many latent and potential Madam Ngozis around us the opportunity to grow and actualize themselves? Or when will African and Nigerian young women, like their Finnish counterparts, lead major political parties and even form government in our country or be allowed to emerge as Governors or other high office holder?

Congratulations to Nigerian women on this year’s International Women’s Day (IWD) celebration and especially to Dr. okonjo-Iweala on her new responsibilities. We are confident that that one day, it will be possible for many more ordinary Nigerian women, with little ease, to ascend the ladder of life and global impact. Obviously, we all have a lot of work to do and the time is now.

Andikan Umoh: The silence in the street struck me -“we shall all die”

Maryam Augie-Abdulmumin: Child Education, An Obligation – Not an option