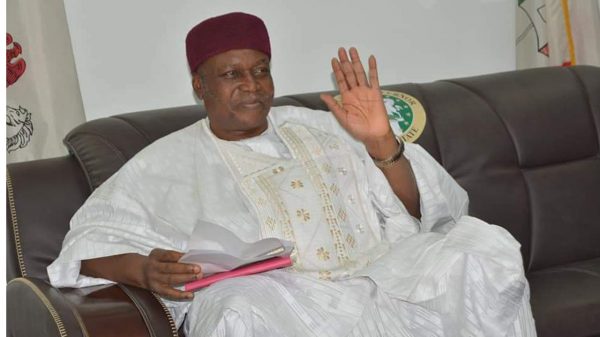 Governor, Darius Ishaku of Taraba state who reportedly left Jalingo since 23 December, 2019 is yet to return to the state capital.

Daily Trust is reporting that the Governor is still in Abuja. He is residing at T.Y. Danjuma House, which is the official lodge of Taraba Governor in the federal capital.

T. Y. Danjuma located at Asokoro area in Federal capital Territory has been receiving Taraba government officials including members of the state House of Assembly since December, 2019. It was gathered that currently all major Taraba government decisions are taken at the T.Y. Danjuma House.

It was last week that the governor approved the appointment of 90 special advisers and the approval was dispatched to Jalingo upon which the Deputy Chief Press Secretary to the Governor, Mr. Iliya Bekyu Akweh issued a press release informing the public

The release on the appointment dated 9 March said in part: “His Excellency, the Executive Governor of Taraba state Arc. Darius Dickson Ishaku has approved the appointment of special advisers”

Taraba state government officials including members of ruling People’s Democratic Party (PDP) insisted that there was nothing wrong for the governor to continue to stay in Abuja and manage state affairs. The Speaker of the State House of Assembly, Mr. Joseph Albasu Kunini said the House has resisted pressure by those he described as unpatriotic persons who are making bad comments and insinuations about the health of the governor. The state Publicity Secretary of People’s Democratic Party (PDP), Alhaji Inuwa Bakari also said in a statement that the absence of the governor has not slowed down government activities as salaries of civil servants are being paid and all projects awarded by the government are going on smoothly. Bakari stated that those making noise including the opposition All Progressives Congress (APC) are mischievous and did not wish the state well. Our findings reveal that government activities at Government House Jalingo have stagnated as most workers report late and close from work early. It was further gathered that key government officials including commissioners and permanent secretaries are always in Abuja to meet the governor on official matters.

“All files that require the attention of the governor are taken to Abuja for him to give approval or directives,” it was explained. Meanwhile, work on the dualisation of Airport road to Pantinafu awarded recently by the state government is progressing. The Chairman of People’s Democratic Party (PDP) in the state, Mr. Victor Bala Kola could not be reached for comment, but the Senior Special Assistant to Governor Darius on Media and Publicity, Mr. Bala Dan Abu when contacted confirmed that the governor is indeed in Abuja, but added that he cannot say anything new on the governor. “What do you want me to tell you apart from what l told you earlier,” he queried.

Nigerian govt warns against handshake, hugging as Coronavirus spread across the world