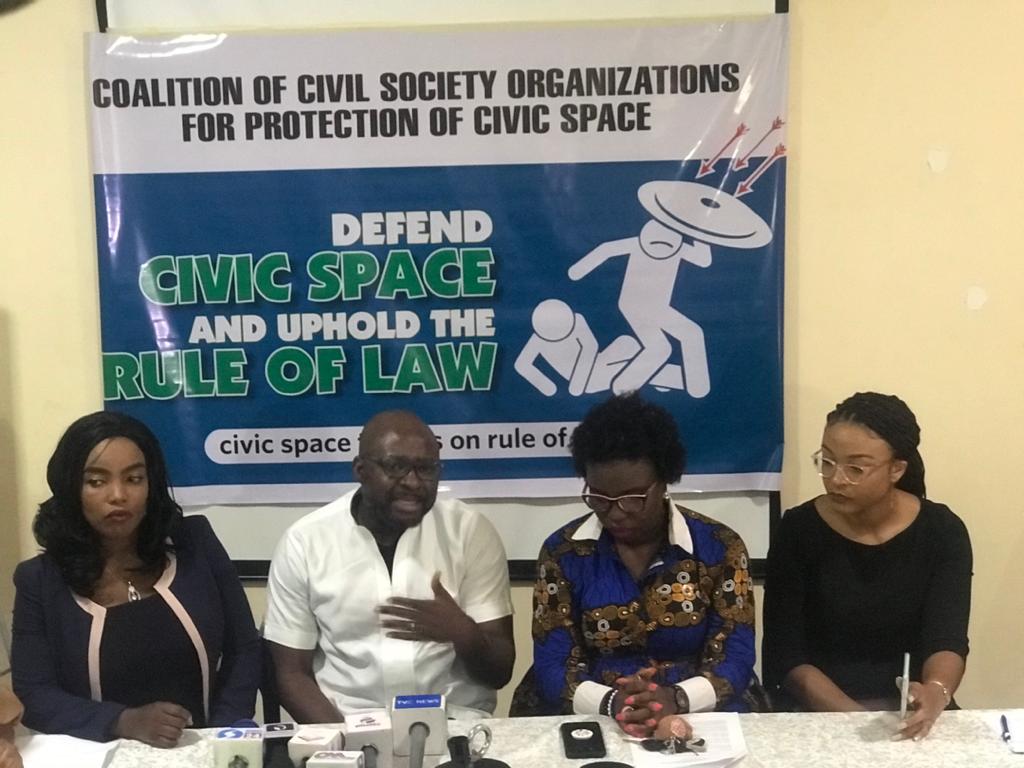 A coalition of one hundred and ten (110) civil society organizations on Wednesday in Abuja are calling on the parlaiment to reject bills before lawmakers that seeks to shrink the media and civi space across the country.

The group in Abuja, said “Media freedom in Nigeria remains under attack, as shown by several cases of arrests and detention of journalists, bloggers and social media activists in the last four years.”

According to the statement issued and made available to NewsWireNGR, “This trend suggests a disturbing trend toward repression of right to freedom of expression and media freedom in the country”.

The statement read by one of the frontline activists at Wednesdays press conference, Bukky Shonibare, “The Internet/Social Media bill, the fast shrinking civic space and the clampdown on critics of government have shown a rising pattern of suppression”.

The statement reads in parts,“The bill which also targeted the internet and on-line media platforms such as Facebook, Twitter, Instagram, YouTube, WhatsApp, and the like, was dropped by the 8th Senate following an outcry by the people in 2016, the CSO’s dubbed COALITION OF CIVIL SOCIETY ORGANIZATIONS FOR PROTECTION OF CIVIC SPACE “.

The group insists that Nigerian lawmakers and especially the Nigerian Senate must reject the Anti-Social Media Bill, as it is unconstitutional and inconsistent with Nigeria’s international obligations, they said “We are glad to inform the members of the Senate and the International Community, that the Anti-Social Media Bill 2019 (SB.132) has been widely and popularly rejected by the people.”

The bill for the Protection from Internet Falsehood and Manipulations; and for Related matters Bill, 2019 (SB.132), has passed second reading at parliament and there’s a public hearing slated for 9th March 2020 to allow for members of the public to have a say before it passes to the next stage – but members of civil society organisations want the bill dropped.

The joint statement by the group noted, “We are glad to inform the members of the Senate and the International Community, that the Anti-Social Media Bill 2019 (SB.132) has been widely and popularly rejected by the people.”

Complete excerpts of the statement issued….

“We are gathered here today to report the summary of the people’s and civil society’s analyses of the Protection from Internet Falsehood and Manipulations; and for Related matters Bill, 2019 (SB.132), ahead of the Senate public hearing slated for 9th March 2020. We are glad to inform the members of the Senate and the International Community, that the Anti-Social Media Bill 2019 (SB.132) has been widely and popularly rejected by the people.

“It has come to the understanding of the people that the Senate Bill 132 (Internet/Social-Media) Bill is a draconian and modified version of the defeated “Bill for an Act to Prohibit Frivolous Petitions and other matters Connected Therewith, 2015 (SB.143), sponsored under the 8th National Assembly. The bill which also targeted the internet and on-line media platforms such as Facebook, Twitter, Instagram, YouTube, WhatsApp, and the like, was dropped by the 8th Senate following an outcry by the people in 2016.

“The latest attempt by the Senate to resuscitate an obnoxious bill that had been hitherto unanimously rejected by the people, constitutes an assault on the people and a flagrant assault on the 1999 Constitution of Nigeria (as amended) which guarantees the human rights of everyone including to freedom of expression. The people have overwhelmingly rejected any attempt to police the internet and gag the right to freedom of expression through back doors.

“It has been affirmed severally in various courts of law that the right to freedom of expression is a constitutional and fundamental right; inviolable under the 1999 constitution. Section 17 (1) of the Constitution expressly states that: “The State Social order is founded on ideals of Freedom, Equality and Justice,” while in section 37, it protects “The Privacy of Citizens, their homes, correspondence, telephone conversations and telegraphic communications is hereby guaranteed and protected.” We invite the Senate to take a serious constitutional note of section 37, as the SB.132 clearly violates this provision.

“It has also come to the knowledge of the people that it is a bill that seeks to give the executive arm of government outright powers to regulate the internet and control communications, but which has been disguised as a private member bill in the Senate. It is therefore instructive, to remind the 9th Senate of the publicly stated position of President Muhammadu Buhari before the first version of the bill was dropped in 2016, and also the position of Vice President Yemi Osinbajo on Internet/Social Media regulations.

“According to the Vice President, “I don’t think that government regulation is necessarily the way to go, but I believe that we as persons of faith and we, as leaders, and those of us who use the social media actively owe a responsibility to our society and to everyone else, to ensure that we don’t allow it to become an instrument of conflict and instrument of war.”

“Media freedom in Nigeria remains under attack, as shown by several cases of arrests and detention of journalists, bloggers and social media activists in the last four years. This trend suggests a disturbing trend toward repression of right to freedom of expression and media freedom in the country. The Internet/Social Media bill, the fast shrinking civic space and the clampdown on critics of government have shown a rising pattern of suppression.

“The 9th Senate is therefore urged to take historical note of how previous sessions of the National Assembly had sided with the people and resisted executive overbearing and repression, thereby safeguarding the civic space, and ensuring respect for Nigeria’s international human rights obligations including under the International Covenant on Civil and Political Rights and the African Charter on Human and Peoples’ Rights. Nigeria has ratified both treaties and has even gone ahead to domesticate the African Charter as part of Nigerian laws.

“This apparently executive plot pushing, manipulating and exploiting the Senate to regulate the social media and internet, will expose people to increased intimidation, harassment, arbitrary arrest and detention, and exacerbate the growing attacks on journalists, human rights defenders and activists.

“The National Assembly must immediately and publicly reject this illegal and unconstitutional bill, ensure full and effective compliance with Nigeria’s international human rights obligations and commitments. We as people and civil society reject this bill as both politically motivated and self-serving.

“At a time when the United States has placed Nigeria on Visa restrictions and Special Watch-List (SWL) for governments that have engaged in or tolerated severe violations of religious freedom, the European Union has also urged?  the Nigerian authorities to guarantee full respect for human rights, the United Nations and Amnesty International have expressed? serious concerns about human rights violations in Nigeria, it is expected that the Senate will not do anything that will portray Nigeria as a repressive state with no regard for human rights and the rule of law.

“The bill is a threat to constitutionally and internationally guaranteed human rights.

“At a time when corruption is endemic and Nigeria has dropped on Transparency International ‘s yearly corruption perception ranking, moving two places down to rank the world’s 34th most corrupt nation, the Social Media/Internet bill will further worsen the position of the country, as it would be seen as a self-serving plot by politicians to block the public demand for transparency and accountability.

“Whereas, Section 15 (5) of the constitution states that “The state shall abolish all corrupt practices and abuse of power.” The SB.132 constitutes an abuse of power and will impede the fight against corruption, which would lead to violations of human rights.

“In addition, the Senate is also urged to take consider the provisions of Section 22: “The press, radio, television, and other agencies of the mass media shall at all times be free to uphold the fundamental objectives contained in this chapter and uphold the responsibility and accountability of the government to the people.” Any attempt to regulate the internet/social media, will directly impede this provision.

“The Senate should also note that there are enough existing laws in the country’s statute books on defamation, privacy, libel and slander to protect public and private individuals along with the 2015 Cybercrimes Act. The SB. 132 Bill, therefore, is a legislative overkill. There is absolutely no need for a new law specially targeting the internet and social media platforms.

“The planned public hearing on SB. 132 should therefore be an avenue to apologize to the people for wasting legislative time in resuscitating an obnoxious bill that had been totally rejected and to drop the bill. The Senate should rather promote bills that would improve the civic space, and not unduly restrict it.

“We urge the National Assembly, in particular the Senate to view the internet platforms as independent dashboard of ideas where people can freely exchange ideas and express their opinions or thoughts.

Related Topics:Nigerian senate
Up Next