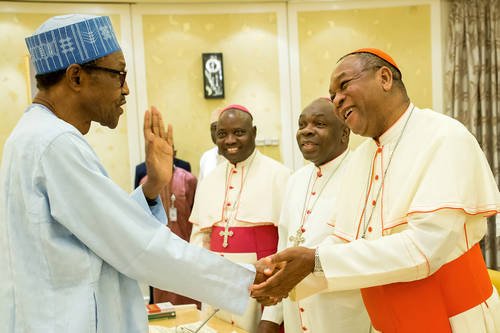 The Catholic Bishops Conference of Nigeria on Wednesday said the Federal Government had not shown willingness to end the spate of killings by the Boko Haram insurgents and herdsmen in the country.

The Catholic bishops, who stated this in a statement by their President, Augustine Akubeze, and Secretary, Camillus Umoh, said the failure of the government to arrest the criminals showed its insincerity and lack of  commitment to protecting lives and property in  the country.

Punch Newspaper reports that the CBCN issued the statement to mark the Ash Wednesday, which marked the beginning of the 40-day Lenten   period.

The body appealed to the international community to come to the aid of the Nigerian government in the fight against Boko Haram insurgency and Fulani terrorists, “who want to graze our country.”

It warned that should the insurgents and the Fulani terrorists succeed, the consequences would be grave not only for the West African sub-region, but also for Africa as a whole.

Berating the Federal Government, the group said, “The level of insecurity in Nigeria today is such that whether at home or on the road, most Nigerians, in all the parts of the country, live in fear. The repeated barbaric execution of Christians by the Boko Haram insurgents and the incessant cases of kidnapping for ransom linked to the same group and other terrorists have traumatised many citizens.

“That the perpetrators of these heinous crimes make public shows of them on social media and Nigerians, do not hear of any arrest or prosecution of the criminals raise grave questions about the ability and willingness of the government to protect the lives of the ordinary Nigerians. To make matters worse, many communities are constantly threatened, harassed and sometimes even sacked by herdsmen, as they seek to take over more territories to graze their cattle forcefully.”

The bishops, who said Nigeria needed foreign assistance, stated, “We equally appeal to the international community to come to the aid of the Nigerian government in the fight against these daredevil terrorists, who want to graze our country. The consequences, should they succeed, will be grave not only for the West African sub-region but also for Africa as a whole.”

The PUNCH observed that as a mark of mourning all Christians whom, they said, “have been victims of the most recent wave of violence against Christians,” the Catholic bishops directed the faithful to be dressed in black on Wednesday and offer prayers and penance for the repose of the souls of the victims.

The CBCN further said, “As we begin the Holy Season, we, the Catholic Bishops of Nigeria, invite all Catholics in Nigeria as well as other Christians and persons of goodwill to unite in prayer and penance for peace and security in our country.”

Advising Christians, it  stated, “This is not a time for compromises for the sake of personal convenience, but rather for heroism in Christian virtues. Remember the words of our Lord: “Do not be afraid of those who kill the body but cannot kill the soul; rather, be afraid of the one who can destroy both the soul and body in Gehenna, (Matthew 10: 28).”

It stated, “We, therefore, appeal to the government to immediately put a stop to this unprecedented wave of violence and brutality aimed particularly at Christians. We also call for the arrest and prosecution of all those behind these senseless killings that sow the dangerous seeds of hate and distrust among the various segments of the Nigerian society.”

The CBCN said although Christians were in sorrow, they were “confident that the light of Christ, which shines in our hearts, will brighten the dark corners of our Nigerian society.”