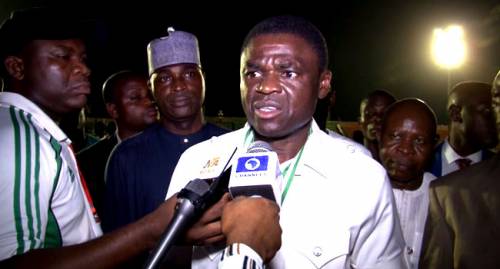 He said the suspended chairman must acknowledged the fact that Obaseki has taken governance in Edo to the next level, therefore he should return to the fold and give him full support as a father.

He asked the former governor to return to the state and apologise to the governor.

Shuaibu said he fell out with Oshiomhole because of his refusal to support the governor whom he said had not deviated from the foundation laid by the APC National Chairman.

Both Obaseki and Oshiomhole had been at loggerheads over who controls the party machinery in the state.

The Deputy Governor of Edo, Mr Philip Shuaibu, said in Abuja while speaking with journalists shortly after the meeting of the APC Governors Forum Steering Committee on Good Governance.

Shuaibu expressed Edo government’s readiness to submit its petition to the Inspector-General of Police (IG) Mohammed Adamu and the Director of DSS, Mr Yusuf Binchi on the rally.

”I am in Abuja to meet with the IG. I have a petition to the IG and the Director of DSS to the effect that Mr Oshiomhole be arrested by the police and DSS for the breakdown of law and order, that he has consistently perpetrated in Edo state.

“For us, we have officially come now to drop our petition with the IG, to the effect that Oshiomhole is not above the law; he should be arrested for violating the state government’s order,” Shuaibu said.

He said that nobody violated Oshiomhole’s orders when he was a governor.

“So, for us, when Oshiomhole continually disobeys the law, when opposition party chairmen do same, he becomes a reference point,” he said.

“That is why I am here on behalf of the state government, to submit a petition to the IG to the effect that Oshiomhole be arrested and prosecuted for breaching the peace of Edo’” he said.