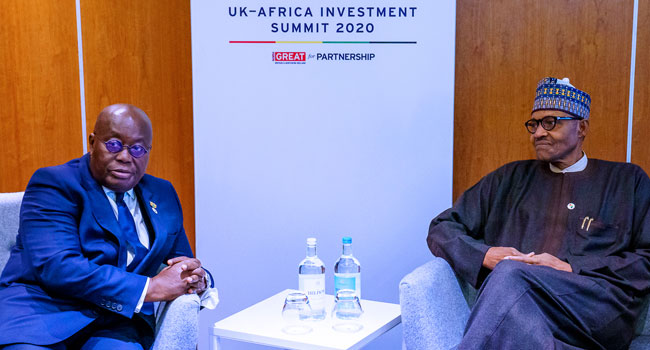 President Muhammadu Buhari has continued to defend the closure of the nation’s borders and he has done so again this time explaining his decision to the Ghanian President during the summit in London.

NewsWireNGR recalls that the Government official statement and position was that Nigeria has partially closed its western border with Benin to curb rice smuggling that is threatening the country’s attempt to boost local production, the government said on Wednesday.

The government wants Nigeria to be self-sufficient in rice and has imposed import controls but these have kept prices high and led to smuggling from Benin into Nigeria. President Muhammadu Buhari has introduced policies since taking office in 2015 that are aimed at curbing imports to boost local production and conserve foreign exchange reserves.

But in London, Buhari said, the partial closure of the borders was not caused solely because food products, particularly rice, were being smuggled into Nigeria, but also because arms and ammunition, as well as hard drugs were being ferried into the country.

Channels Television reports that the president said this on Monday at a bilateral meeting in London, on the sidelines of the UK-Africa Investment Summit 2020 with President Nana Akufo-Addo of Ghana.

He said he could not keep his eyes open, and watch youths being destroyed through cheap hard drugs, and compromised security caused by unbridled influx of small arms. But this is the first time the conversation around arms smuggling is being talked about by the Nigerian Government for reasons over the border closure,

“When most of the vehicles carrying rice and other food products through our land borders are intercepted, you find cheap hard drugs, and small arms, under the food products. This has terrible consequences for any country,” President Buhari said.

He said it was regrettable that the partial border closure was having “negative economic impact on our neighbours,” but added that “we cannot leave our country, particularly the youths, endangered.”

“We are in fact the biggest victims,” he lamented.

On the time frame for reopening the borders, President Buhari said it would not happen till the final report of a committee set up on the matter was submitted and considered.

“We will get things sorted out. Our farmers, especially those who grow rice, now have a market, and are happy, and we are also concerned about hard drugs and weapons. Once the committee comes up with its recommendations, we will sit and consider them,” the President said.

President Akufo-Addo, while showing understanding of the need for Nigeria to protect her citizens, pleaded for “an expedited process, because the Nigerian market is significant for certain categories of business people in Ghana.”