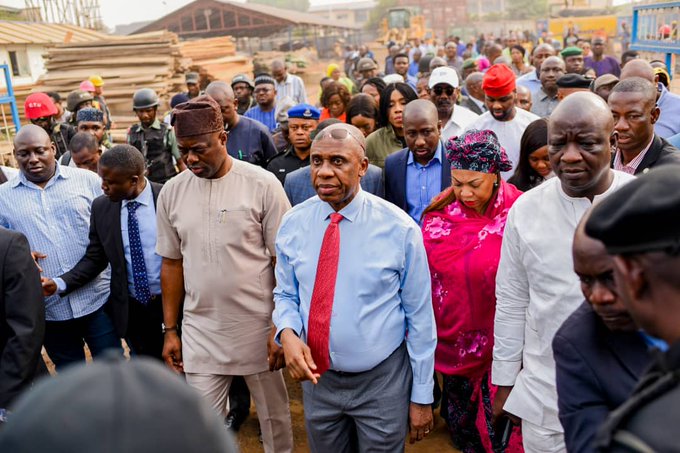 The minister of transportation, Mr Rotimi Amaechi, Monday took back his words that the project would be completed in April.

The former governor of Rivers state, accompanied by Oluseyi Abiodun Makind, Oyo State Governor, said it would no longer be feasible to complete the work in April.

Recall that Amaechi had promised to complete the job before April 2020. He asked Lagosians and Nigerians at large to exercise patience, assuring that the work would finish in April.

“We have told you we will be out of this place latest April (2020). We are no longer giving ourselves the time, the contractor now give us the time.”

However, having gone to the site to inspect the project on Monday (Today), Amaechi expressed dissatisfaction, noting that they would work and redouble their efforts to complete the project and meet set targets.

His words as contained in his Twitter handle: “Today (Monday), Oyo State Governor is accompanying us on the monthly inspection of work on the Lagos-Ibadan rail line. We are going the whole nine yards,” he tweeted.

“From the mega station in Ebute Metta to Apapa and all the way to Ibadan. A large chunk of this rail line is in Oyo State. “Looking at the state of work in Apapa, completing the project in April doesn’t seem feasible, especially the extension of the rail line to the seaport.

“We get a meagre N7,500 – Pay us our three months salaries” – Kwara workers protest over non-payment of salaries