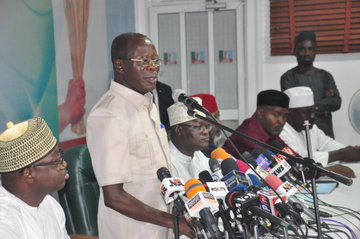 Adams Oshiomhole, national chairman of the All Progressives Congress (APC), has accused the Peoples Democratic Party (PDP) of making reckless statements to intimidate the judiciary and cause anarchy in the country.

He said this in reaction to a statement by Uche Secondus, PDP national chairman. Secondus had said the removal of Emeka Ihedioha as governor of Imo state by the apex court should be reviewed and reversed.

But speaking with reporters at the party’s national secretariat on Friday, Adams Oshiomhole, APC national chairman, accused the opposition party of “carefully” planning an unrest following the decision of the court.

“The PDP yesterday used language that even people who are partially mad in a democracy are not expected to use,” Oshiomhole said.

“We watched as PDP made reckless statements that are designed not only to intimidate the judiciary but calculated to lay the foundation for carefully planned unrest with a view of undermining the peace and stability of the Nigerian nation.”

The APC chairman said Ihedioha did not get two-thirds votes across the 27 local government areas of the state which is required by law to be pronounced winner of the poll.

“In a society that is committed to fairness and the rule of law, the returning officer ought not only to be dismissed but he also ought to have reported himself to the security how he arrived at the decision to declare Emeka Ihedioha as governor,” he said.

Oshiomhole added that when the supreme court declared PDP as winners of Zamfara and Rivers states, the APC obeyed the order even when it was not palatable.

“looking forward to a peaceful hand over in 2023” – Muhammadu Buhari