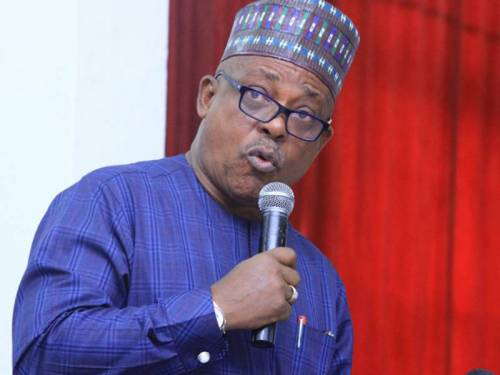 The apex court had on Tuesday sacked PDP’s Emeka Ihedioha as governor, and ordered the Independent National Electoral Commission (INEC) to return Hope Uzodinma, candidate of the All Progressives Congress (APC) who came a distant fourth in the election.

Addressing a conference on Thursday,  Uche Secondus, chairman of PDP, said the supreme court judgement must be reversed in the interest of justice.

“In the light of extraordinary circumstances that vitiates that judgment as a product manipulation and a clear coup d’etat against the will of the people of Imo state, we demand that the decision of the supreme court on the Imo governorship election be reviewed and reversed in the interest of justice,” he said.

“Furthermore we demand that Justice Tanko Muhammed, the CJN and his colleagues on the Imo governorship panel recuse themselves from the remaining cases involving PDP in the supreme court.

“We state for the records that the supreme court under Justice Tanko Muhammed shall be held responsible if there is any breakdown of law and order in any state as a result of judgments procured solely for political rather than judicial reasons as is currently happening.

“The supreme court, in a host of cases, the latest and most celebrated being Atiku V Buhari & Ors, consistently decided that for a petitioner to succeed in an allegation of infraction of any provision of the electoral act especially one complaining about malpractice, as in this case, wrongful exclusion of votes, the petitioner must call witnesses polling unit by polling unit.

“The question is, how many witnesses did Uzodinma/APC call from the 388 polling units from where the supreme court allocated votes to him.

“The so called results from the 388 Polling units were rightfully rejected, in line with several decisions of the supreme court, by the tribunal and court of appeal as it was merely dumped on the tribunal in a Ghana Must Go bag, by a policeman who had no mandate of the police to testify at the tribunal.”