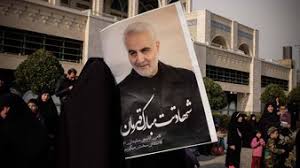 Iran on Saturday said a Ukrainian airliner that crashed outside of an airport in Tehran, killing all 176 people on board, was shot down unintentionally by its armed forces, according to a statement by its armed forces on state television.

The Boeing Co. 737-800 jet crashed four hours after Iran had launched military strikes against the U.S. in Iraq in retaliation for the killing of a top general, and the Middle Eastern state was on high alert for potential U.S. response.

The plane approached a sensitive military base operated by the Islamic Revolutionary Guard Corps and was downed due to “human error,” Iran’s general staff of the armed forces said in the statement.

Prior to Iran’s announcement, Tehran gave Ukrainian investigators access to the so-called black-box data and cockpit voice recorders from the Ukraine International Airlines airliner that crashed Wednesday, and Iranian investigators said they would be willing to hand them over to other countries as well for analysis.

Iran’s willingness to cooperate could help resolve an investigation that looked to be especially fraught, given the open hostilities between the U.S. and Tehran. Indeed, immediately after the crash, Iranian officials told local media that Iran’s civil aviation authority wouldn’t provide Boeing or the U.S. access to the black boxes from the Boeing 737-800 jet.

Iranian officials since have invited investigators from Boeing, the U.S., Ukraine, France and Canada to probe the causes of Wednesday’s crash, which killed all people on board shortly after the jet took off from Tehran, including a number of Canadians.

US Imposes more sanctions on Iran over Missile strikes