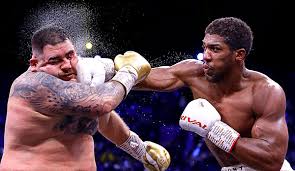 Ikhouria disclosed this while speaking to newsmen on Sunday in Benin.

“Nobody had expected Joshua loosing to him back then in June, I’m happy he has gotten back his titles, he has learnt a lesson from this competition, from all the details we heard before the fight.

“He trained so hard, he worked on himself by trimming down in size, lost some weight, it helped him to move faster.

“I’m particularly happy and proud of him that he has regain back his titles.

“There is no other option to hard work and discipline. If you are discipline and you listen to what your coaches are telling you, you will not fail,” he said.

The ex-international tasked up coming athletes on hard work and discipline, saying that they should watch the type of food they eat so they can remain fit at all times.

Meanwhile, President Muhammadu Buhari has thumbed up for World Heavyweight Boxing Champion, Anthony Joshua, for regaining his belts on Saturday night in a rematch with Mexican, Andy Ruiz Jnr. The President, in a congratulatory message by his spokesman, Mr Femi Adesina in Abuja on Sunday, rejoiced with Joshua, saluting him for bringing joy to millions of Nigerians at home and in the Diaspora.

He noted that Joshua’s supporters across the world had rooted for him to regain the titles he lost about six months ago. “The downfall of a man is truly not the end of his life. There’s always another, and better day. This is a lesson we must all learn from you as a country,” Buhari told the comeback world champion. He wished Anthony Joshua well ”as he seeks to bring more glory to Nigeria, and to the boxing profession”.