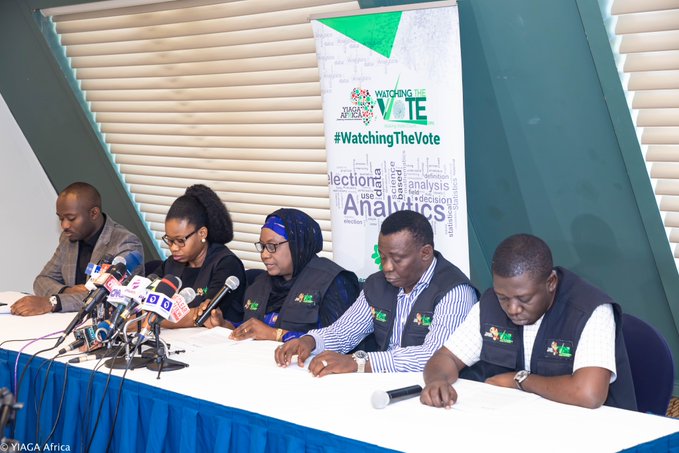 YIAGA AFRICA data shows that election was not conducted in 25% of the polling units sampled in Bayelsa State and the results of the election were manipulated.

The group, through its Watching the Vote, Parallel Voting Technology “shows that there were no elections in approximately 25% of polling units and suggests that the collation process for the Bayelsa governorship election was manipulated – particularly for Southern Ijaw LGA”, in a joint statement signed by its Executive Director, Samson Itodo.

“This calls into question the official results announced by INEC and credibility of this election,” the statement reads.

The PVT used by YIAGA Africa, enables the group to provide independent information on the conduct of elections and independently determining if the results announced reflects the votes cast.

But the credibility of the Bayelsa Governorship elections has been questioned, according to the report, “While the PVT cannot determine who has won the governorship election for Bayelsa, regardless of the outcome, the PVT estimates suggests that the official results were manipulated during the collation process”.

YIAGA AFRICA urgently calls upon INEC to conduct an inclusive, transparent and accountable audit of the Bayelsa gubernatorial results that involves political parties and civil society.

The statement reads in parts, “The audit must include two elements. First, it must identify all polling units that had no election on November 16 so that new elections can be held for those polling units. Second, it must re-collate the results for those polling units that did hold elections on November 16 so that the correct partial results can be determined. YIAGA AFRICA stands ready to work with INEC on this audit so that the people of Bayelsa can have confidence in their elections and the results for the 2019 governorship results”.

According to the observer group, “The Bayelsa governorship election still experienced political parties building their campaign strategy around deploying sufficient money to buy the elections, acquiring arms and paying thugs who are willing to disrupt the process. This practice remains inimical to democratic development in Nigeria and regardless of what party benefits from the outcome of the election, the question on the development of our electoral democracy and the quality of participation remains a major challenge”.

The group condemned the violent activities carried out by the various stakeholders in the state as well as activities by non-state actors in disrupting the entire process.

“The political class have perfected their act of undermining the process and is consistently making it difficult for INEC to conduct the elections across board. Beyond the parties are also the security agencies who are failing in their critical role of supporting the work of INEC for the safe, effective and successful deployment of materials and safeguarding the process. This failure remains a factor enabling the late commencement of polls, breach of the electoral laws and the willfull commission of electoral offences”.

The group called for the prosecution of persons found wanting, “Those found responsible, from INEC, political parties, security agencies, or any other body, for either preventing a polling unit from opening or manipulating the results during the collation process must be held accountable and brought to book. The culture of impunity in Nigeria must end.”

The Bayelsa governorship election was held on the same day as the Kogi Gubernatorial and Kogi West Senatorial elections .