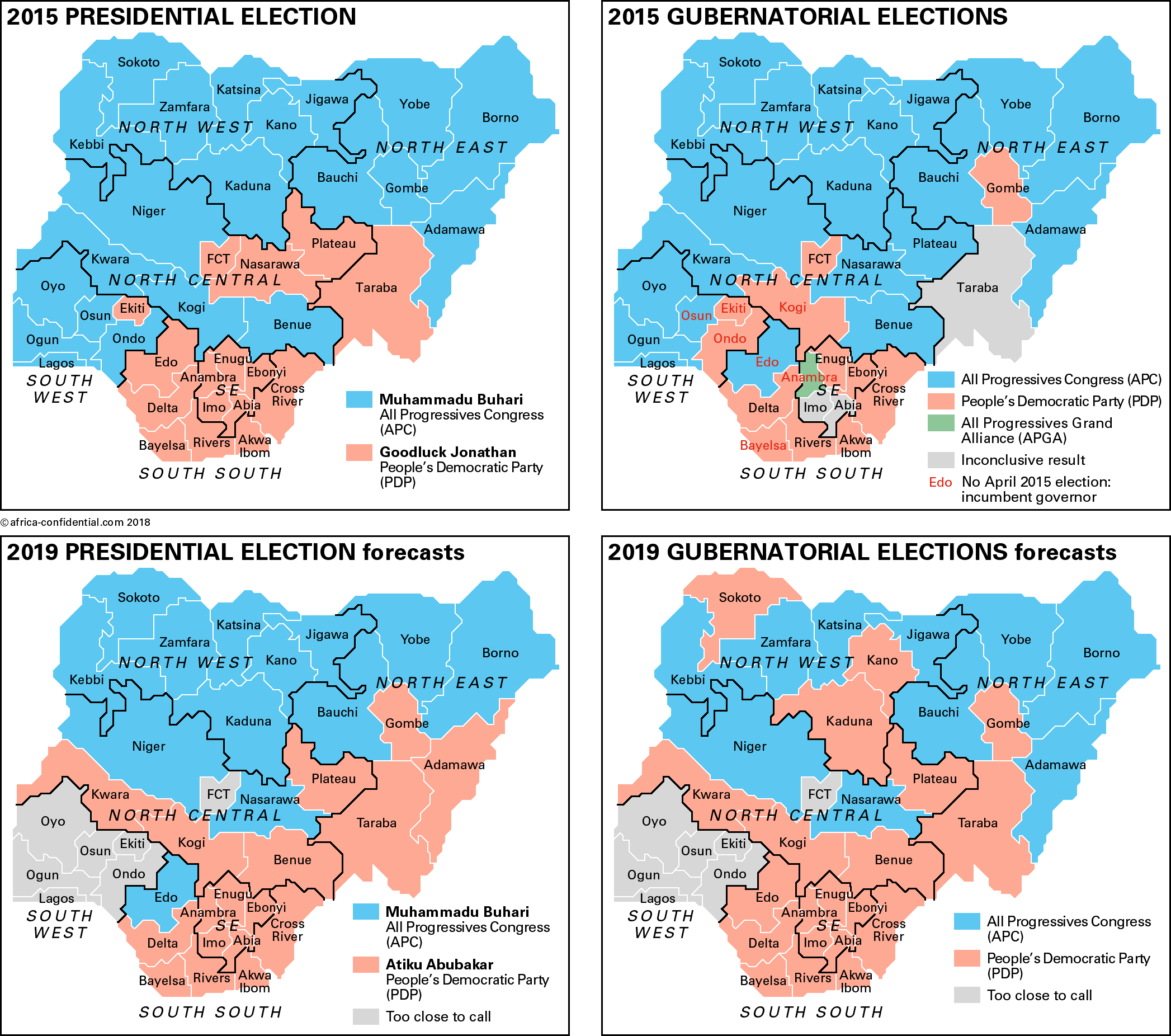 In this article by African Confidential, the Nigerian 2019 Presidential elections will certainly be a two-horse race but while the opposition Peoples Democratic Party Candidate, Atiku Abubakar seems to have built a new coalition, a united northern support for incumbent President Buhari will give him an opportunity for a second term in office.

Hell froze over in Nigeria on 11 October. That’s when former President Olusegun Obasanjo endorsed his once Vice-President and newly crowned leader of the opposition People’s Democratic Party (PDP), Atiku Abubakar. It showed how determined both men, for differing reasons, are to drive President Muhammadu Buhari from power in next February’s elections.

The two titans had been mortal enemies since 2003, when Obasanjo used the powers of the presidency to dismember Atiku’s network and thwart his ambition of getting the top job. Given the dominance of patronage networks across the country, these feuds have come to dominate politics as much as, or more than, ethnicity or religion.

More influential still is cash. Street wisdom explains this plutocratic competition as ‘government of the greedy, by the greedy, for the greedy’, in an economy fuelled by government contracts diverted through the patronage networks.

Even political kingpins change loyalty and party according to where the money is. Atiku, accused of heroic levels of malfeasance by his opponents, has shifted party three times since leaving the PDP in 2006, before returning earlier
this year.

In the end, this mattered little to the PDP delegates at the convention who picked him as their presidential candidate. Opponents accused Atiku of winning a bidding war for the nomination by offering far more than any of the former governors competing for the candidacy.

PDP delegates were persuaded by the argument that Atiku was the only candidate who could beat President Buhari and his All Progressives Congress (APC). Despite spending the last decade in the wilderness, Atiku’s personal wealth, vast contacts, and deep knowledge of the nation’s politics convinced the PDP congress to choose him as the flagbearer.

General support
The arrival of former head of military intelligence General Aliyu Mohammed Gusau on the second day of the congress, telling PDP officials that he and his fellow northern generals Ibrahim Babangida and Abdulsalami Abubakar would support Atiku’s campaign if he got the nomination, was the final boost.

Chaos at the APC conventions during the first week of October, with indecisive, cabal-rigged primaries all over the country, underlined the party’s weaknesses and Buhari’s inability to control them. The fact that many Nigerians admire the PDP candidate because ‘Atiku grow money’ highlights his influence over the country’s oligarchs, but also points to President Buhari’s vulnerability on the economy.

Nigeria emerged last year from its deepest recession in 25 years, but citizens see little recovery in their daily lives. Social indicators, health and education provision, for over 80% of the population are declining. Reports of rent-seeking and inertia in the president’s inner circle – dominated by family members and kinsmen – has tarnished the anti-corruption credentials that swept him to power in 2015 over the hugely corrupt administration of President Goodluck Jonathan.

Kingpins
Atiku’s prospects for success depend on his ability to build a  coalition with the nation’s political kingpins. Before his struggle with Obasanjo, Atiku led the influential People’s Democratic Movement (PDM), which was originally built by Shehu Musa Yar’Adua, President Umaru Yar’Adua‘s elder brother who was murdered by General Sani Abacha‘s assassins in prison in 1997 (AC Vol 38 No 25, After Yar’Adua). PDM provided the backbone of the PDP when it was formed in 1998 during the transition to the Fourth Republic, helping to deliver both the 1999 and 2003 elections.

A dramatic falling out over the 2003 elections led Obasanjo to undermine the PDM network in his second term, using the carrot of government contracts and the stick of arrest by the Economic and Financial Crimes Commission to hound Atiku’s support base. Many supporters abandoned him during this period, but some remain influential across the Middle Belt and the south, including in the oil industry and Lagos business circles. PDP leaders are hoping that Atiku can revive the old PDM machine, despite the age of some its key members, with the help of younger allies.

Moreover, Nigeria’s constitution requires that a candidate must receive a majority of the votes nationwide, plus 25% of the vote in two-thirds of the nation’s 36 states in order to be elected president in the first round of voting. If those conditions are not met, the election then goes to a second round between the top two of the first round. Consequently, both the PDP and APC are looking to regional strategies in 2019.

The riggers’ playbook
Party activists speak with nostalgia of elections before 2011, when they could use their control of local and state governments simply to change the numbers overnight as vote totals would move up the cumbersome collation levels from polling station to the ward, to local government, to state, and finally to the federal level.

This is still the pattern in many rural areas, in the south-east and the Niger Delta. Yet Professor Attahiru Jega‘s reforms when he was chair of the Independent National Electoral Commission from 2010 to 2015, particularly the biometric voter cards and electronic card readers, disrupted the established rigging operations, making the 2015 vote a serious contest. In theory, only legitimate voters can cast a ballot, because their thumbprints are on their voter’s cards, and the final tallies could be sent to INEC to check numbers as they moved up the collation chain.

Recent by-elections suggest that the riggers have adapted. From the outset, the voter cards have been problematic. Party apparatchiks, more in rural areas, discovered that they could intercept the cards, and INEC was not always careful in distributing them. Additional cards can also be bought directly from the Chinese vendor, and  some INEC staffers are willing to sell voter data from the commission’s compromised data bases, which are vulnerable to hackers.

INEC sometimes gives cards in rural areas, internal refugee camps, and elsewhere to traditional district heads and chieftains – many of whom are party stalwarts – to distribute. Many of these cards do not reach their owners, only to reappear during the elections in the hands of others. In December 2014, for example, INEC announced that 83% of the voter cards in Yobe state had been distributed, despite the fact that most of the state was then occupied by Boko Haram.

In the latest registration exercise, INEC reported that as of mid-August, over seven million voter cards – nearly a tenth of registered voters – had yet to be collected by voters from distribution centres run by state and local governments. Some of them are hoarding them for use by blocks of their own supporters on election day.

Given the problems electronic card readers had in reading thumbprints in the first place, and the willingness of INEC polling unit staff to allow anyone with a card to vote, an unknown number of local political machine supporters and under-age voters may vote two or three times each on election day, especially in rural areas.

Such votes will also escape any parallel vote counts, since the rolls will record them as belonging to legitimate voters. Moreover, INEC staff will often allow individuals without cards to vote on election day as long as they bring some other form of identification or some other way to vouch for their citizenship. Many legitimate voters are able to vote this way, sometimes voting alongside an illegal voter using his/her card, and inflating the totals.

Greater difficulties in rigging have also increased the appeal and price of vote-buying across the country. Reports from the July 2018 gubernatorial election in Ekiti state claimed the victorious APC had offered 5,000 naira (about US$14) per vote, defeating the PDP candidate’s bid of 4,000 naira. Also important was the fact that the outgoing PDP governor had neglected to pay thousands of civil servants and teachers and had to borrow the money from the governor of Rivers State.

In some polling units, voters must take a photo of their vote in the booth with their phones in order to receive their cash, or to avoid attacks from party thugs. Political toughs have also been reported preventing voters from reaching polls in areas controlled by the opposing party.

INEC on the block
Recent by-elections have also seen the APC use the power of incumbency to lean on INEC to cancel elections in opposition wards or local governments when vote totals went the ‘wrong’ way, and order reruns with dubious outcomes amid massive police and military presence.

When PDP candidate Ademola Adeleke was declared victor in the Osun gubernatorial election by 353 votes on 22 September by the state-level INEC officer, the federal INEC stepped in and suspended seven polling units. These were rerun five days later, with the APC candidate, AlhajiGboyega Oyetola, emerging victorious overall by 482 votes.

Local media reported that INEC staff were forcibly removed and replaced by staff wearing badges from the presidency. Amid heavy security and reports of widespread violence, voters and election observers were prevented from accessing polls, such that foreign governments and local civil society activists were outraged and the outcome was discredited.

INEC’s loyalties are in question. Its ruling commissioners are seen as evenly divided between APC and PDP, but the chair, Professor Mahmood Yakubu, is of uncertain leanings, if any. The Osun election debacle, however, has PDP leaders worried. Also, APC control over the military, police, and the State Security Service may prove pivotal in changing election results and intimidating voters, as the PDP did when it was in power. If the election is close, as appears likely, then a runoff is possible for which INEC may be unprepared.

What is certain is that these rigging activities, or the presumption that opponents are engaging in them, will provoke clashes in some localities. Plateau, Kaduna, Rivers, and Akwa Ibom states are vulnerable, and Kano and Katsina states may join the list if President Buhari is not declared the winner.

His street support is still impressive across the north and he remains a force to be reckoned with – even if his APC allies are divided or upset with the primaries or his overall approach to governance. With the powers of incumbency behind him, he may hold the upper hand. Many of the 21 APC governors will also hold this advantage, but more of them will be vulnerable to PDP challengers, especially in Plateau, Kaduna, Kogi, Imo, and perhaps even Lagos and Kano, although these latter two states look stronger for the APC.

Atiku’s deep experience in election matters may outflank Buhari’s APC handlers, but he will need more than just his deep pockets to outbuy or check the APC machine. He will also need to demonstrate genuine public support, mobilised by a major ground operation backed by local PDP networks.

At 71, Atiku is more energetic and comfortable with speaking on the stump than the taciturn, 75-year-old Buhari. That will be important for reaching Nigeria’s social media-savvy voters, who threw their weight behind Buhari in 2015 but have grown frustrated with his slow pace. If the election does end up close, as appears likely, the APC’s control of the security forces may prove pivotal and provoke a crisis. If, however, Atiku does in fact win and the APC respects the result, as Jonathan did in 2015, Nigerians may at least come to feel that elections, however flawed, can lead to change.