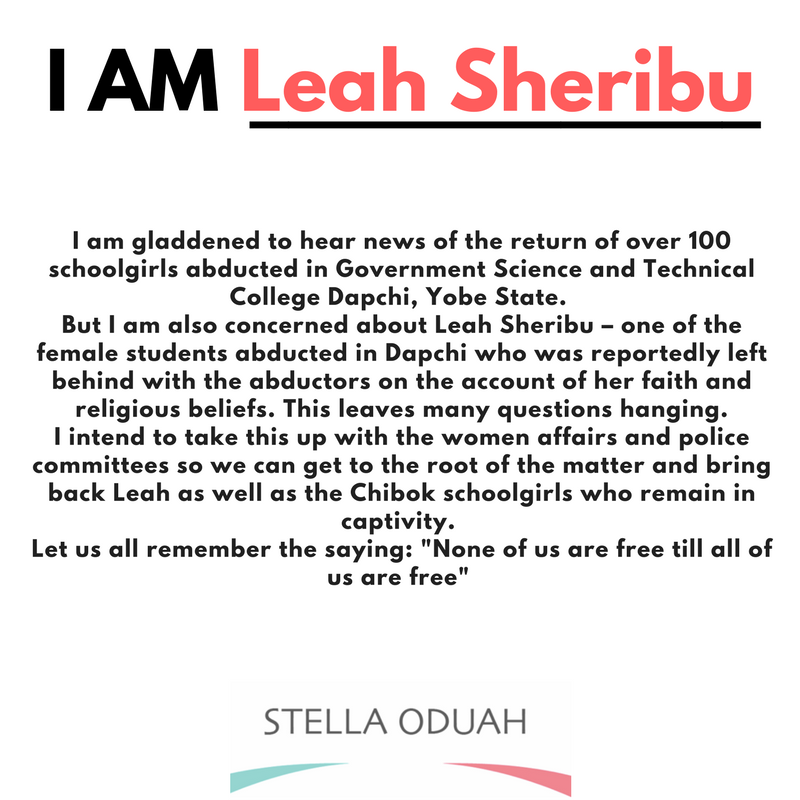 Senator representing Anambra North, Stella Oduah is pushing for a permanent legislative solution to the issue of school safety following the frequent targeting of female students by Boko Haram insurgents in the Northeast region of Nigeria.

Senator Oduah made this known as she expressed mixed feelings over the return of the abducted Dapchi girls – she noted that she was “gladdened” on one hand but “concerned” on the other due to the fact that one of the girls, Leah Sharibu is being held on account of her religious beliefs.
Senator Oduah said: “I am gladdened to hear news of the return of over 100 schoolgirls abducted in Government Science and Technical College Dapchi, Yobe State.

“But I am also concerned about Leah Sharibu – one of the female students abducted in Dapchi who was reportedly left behind with the abductors on the account of her faith and religious beliefs. This leaves many questions hanging.

“I intend to take this up with the women affairs and police committees so we can get to the root of the matter and bring back Leah as well as the Chibok schoolgirls who remain in captivity.
“I look forward to consulting with my colleagues in the North East, Security Agencies and Civil Society towards proffering a legislative solution to the issue of School Safety.
“Let us all remember the saying: “Until we are all free, we are none of us free. “
Senator Oduah, who is the President, ECOWAS Female Parliament (ECOFEPA) and Vice Chairman, Senate Committee on Women Affairs also noted that the threats to schools in the North East is damning on the already alarmingly high rate of the out-of-school children in Nigeria. Citing a UNICEF report which revealed that 60% of the 10.5 million out of school children in Nigeria are female, Oduah remarked that, “it could only get worse if we do nothing to assure our girls that they are safe in school. We have to move now.”