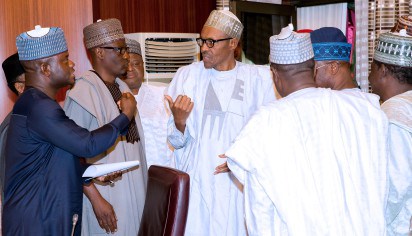 Following news of his purported re-appointment as campaign manager for the re-election of President Buhari, a few days ago, the Minister of Transportation Mr Rotimi Amaechi seems to have some hurdles to overcome.

All Progressives Congress governors met late evening last night, Thursday 4th of January in Abuja where the Campaign team had requested some contribution from the governors towards a successful campaign.

Aladeh dot .com reports that Mr Amaechi had relayed to the governors a decision for each to contribute the sum of fifty million Naira a request that was rejected by 13 of the governors. Those who rejected were of the opinion that they would want to hear “directly from President Buhari” before they will contribute. Two of the governors queried the rationale behind such demands. They say since President Buhari is leading the fight against corruption, it will be nice to hear from him directly so he can tell them from where they should get the amount.

As at the time of filing the report, three of the APC governors who attended the meeting have already made their contribution.

Leading up to the 2015 election, President Buhari who was the candidate of the APC had told the nation he wasn’t rich enough and money was reportedly contributed to his campaign.