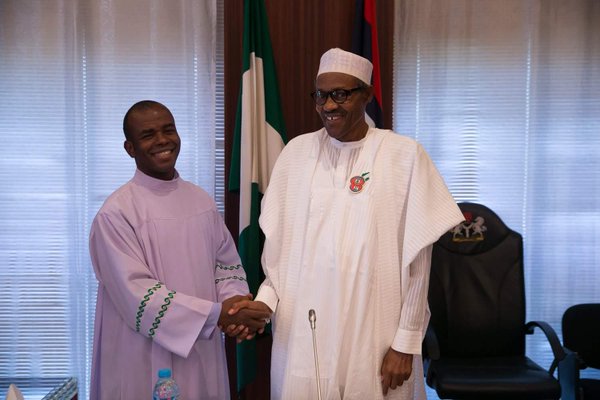 Fiery Enugu priest, the Rev. Fr. Ejike Mbaka has warned President Muhammadu Buhari not to contemplate seeking for a second tenure in 2019.

Mbaka, the spiritual director, Adoration Ministry, Enugu, Nigeria, said Buhari would be totally disgraced if he takes a shot at the presidency after his current tenure.

He spoke before thousands of worshippers in a New Year Message he delivered early Monday morning.

At the same pulpit three years ago, he had prophesied that then President Goodluck Jonathan would be defeated in the 2015 election.

The full transcript of the message can be seen below….

The Lord says, Nigerians, he says, captive Nigerians, you will be speedily rescued; Nigerians, things are very very difficult, hard and tough nowadays; the hardship is not from God, they are man made; the wicked cabals and satanic agents in this country have wickedly kidnapped the goodwill and good intentions of Mr. President, Muhammadu Buhari; his good intentions have been kidnapped; President Buhari must wake up and sit up immediately or…heaven demands him, heaven demands Buhari, our President to change all those who are holding and caging him in captivity; if he will not change them, he will be changed; Mr. President wake up; sit up; God said you are toying with the privilege given to you; there is no time; Nigerians are dying in your hand; people are not happy with your system. Change or you will be changed; God said that Buhari is in trouble; Buhari is hypnotized; Buhair is in a horrible bondage; Buhari’s mantra has been canibalized. Unless President Buhari quickly and strategically, positions the right people and changes the former ones he inaugurated by him, the wind of change that he himself inaugurated will blow him away shamefully. The wind will be too strong that Mr. President and the cabal will be blown out of office shamefully. The wind will be irresistible for it will come like a hurricane. Buhari can handle this problem but number one, his office, if he is not careful, another will take.

Number 2, if he is doesn’t want to move Nigeria forward, God says He himself will plan a strategy of moving Nigeria forward. His pattern of embattling corruption is not just archaic, barbaric but is witch-hunting, terribly selective. Mr. Buhari as the President, why should you be picking and choosing those that you and your so-called EFCC man would want to arrest, so that your party becomes a hideout for criminals, so that any person who does not want to be arrested will become an APC person? Is that corruption on itself?

Change or you will be changed, after all you are the one who introduced change as your mantra. Nigerian economy is in shambles and Nigerians are in sorrow. NIgeria is not just passing through an economic depression but also it is a time of economic repression and compression. Very soon, Nigerians will know that the country is in terrible mess. The cabals have messed up the President and confused him. So, Mr. President, you are to be blamed, not your cabals. You have your brooms, but the cabals have their bags; either you sweep them away or they throw you into the bag. Heaven cried that your methodology is not just archaic but too sluggish., very slow. The situation in Nigeria needs speed but you are too dull.

Your change mantra is questionable; you are to change your change or you will be disgraced out of office. Your agriculture scheme has an anti-agenda that is cancerous. Why should be talking about agriculture and you leave the Fulani herdsmen? Farmers don’t have hope; don’t you hear what is happening in the country? Can’t you use your presidential mandate and help the less privileged? The spirit of God says that Mr. President is just president in the mouth; he is not the real president per say; he is a pseudo president, people are running the government the way they like and giving him to articles to sign; Mr. President doesn’t know what is happening in his government, what a pity. But no matter what is happening, God assured us that Nigerians and Nigeria are not just in His hands but in his heart and his eyes.

Mr president tried his best to war against insurgency, he tried to stop excessive spending, living in opulence, he is an expert in stopping opulent life, swindling of government property but the way he is going after it, he is too slow. God loves him and gave him the mandate, he wanted to fight corruption but corruption is fighting him back, so that anyone who wants to perform corruption in a very smart way, will run into APC. Mr President wake up, save destiny and save your integrity. God said that the sitting President is not the one Nigerians trusted, wake up. There are areas the President started doing well before he became sick; anybody can become sick, don’t rejoice because Mr. President is sick; we prayed and God granted him healing but you know that age is not on his side. Even if you are healthy but you are not strong, there will be problem.

So, Mr. President, as I was waiting on the Lord, I’m asked to advise you, don’t come out for 2nd tenure, after this, retire, peacefully. Mr. President you are the cause of your own problem. God gave you an adviser, a wonderful mentor, a visionist, a matriarch, in the person of your wife, Aisha, but you don’t want to listen to her, that woman is heartbroken, because she understood that you are not yourself. Come back to yourself or you will cry by the time you will be sent out of office. So, those who are encouraging you to come out and run again, they want to disgrace you shamefully and publicly.

We keep on praying for your quick recovery but you know when the President is sick and age is not on his side, the message came, that is why the government schools are sick, the government hospitals are sick, the government roads are sick; power, electricity, sick, the economy is sick; unemployment becomes the order of the day, our graduates, our youths are living in abject poverty and hopelessness, the countrymen are sick, hunger is ravaging ravaging the people of God; investors have no more confidence in Nigeria. The agro-vision has become a mere illusion; even to take loan for farm has become the favour of the rich, so that as you keep on fighting corruption, many who are around you are incubating and manuring corruption. Business men are confused; because they don’t know to do as a result of the unstable economy.

Some of us may begin to ask, but why did God choose Buhari at all? God has His reasons; when he chose Saul, He had His reasons, but at a time he rejected Saul, that is God for you. Jesus chose Judas, in His divinity he chose Judas as an Apostle, the same Judas betrayed Him and Judas office another took; you can see the message is not sweet. The same God chose Jonathan, Goodluck, during the oil boom, had Jonathan invested well, then Nigerians won’t be suffering what we are suffering now; even in his hometown Otuoke, go to Niger Delta, there was no impact of governance, nothing. That’s why God pushed him out. Mr. President, if you don’t want to be pushed out, you have to wake up. So, God who chose Buhari, it is for a purpose. At a particular time in the life of Jonah, the whale swallowed him; at time Jonah could not prophesy, he could not do his prophetic duty again; that is how Buhari’s vision was swallowed.

And then what shall be done. God doesn’t make mistake. When God said Buhari will become the President, he became the president; when God decided to put Adam and Eve in paradise, he loved them, but at a time, the same God chased them out. So, the cabal thing, Mr. President Nigerians are getting disappointed in you; I was thinking of the kind of prayer we are going to share, because this year is a year of primary for all the parties. Some will start this year, I am not talking about PDP or APC, I’m praying God to give us a man after His heart. Now, it is the turn of the Northerners, the Northerners will complete their eight years. If mr president, Buhari will not continue, if you go to Gombe, go to Gombe, it was a rural state, the present Governor there, Ibrahim Hassan, has turned that place into almost an ultra modern city and that man was a former accountant general of the country. If you go to Gombe, you won’t know Gombe again; why can’t such a person come out; I don’t know the party he is in; and he is still a young man; in his early 50s, whether in PDP or APC I don’t know but whoever is doing that kind of magic in Gombe can handle Nigeria. A man who did Phd in accountancy, chartered in marketing, chartered in accountancy, a lot of things, a guru, we need somebody with such aura. And the Gombe people will tell you, he does not discriminate between Muslims and Christians, he is shielding even Christians there. Some pastors he gave them land, gave land for churches. I am not campaigning for him, but I am talking about somebody who can lead us forward, somebody with vision, with agenda, to change Nigeria is not difficult; wherever such a person is, let his party make him available for Nigerians to see it.

Before it will be the turn of the Igbos, it is not yet our turn, it will soon be our turn, when it is our turn, all of us will talk about it.

Therefore my people, we are talking about value chain economy; healthy economy; security in the country, employment, educational system that is working, then God disclosed a time when most of our run-away Nigerians started coming home. A time is coming when Nigerian is going to be a country that is worthy for investment, investors will come from the North, South and East, from foreign countries to invest in Nigeria; at that time, the people can see that the government of Nigeria and the pattern of governance is our problem. God has given Nigerians everything and He says, ‘Nigerians be patient with me.’ It will not take time I will begin to deal wickedly to those who are dealing wickedly to you people. Those who are punishing you, I will punish.

In Nigeria today, there is the hidden tribal religious and interdenominational wars that are looming. God is promising that He will send a credible President that will handle the unity of the country not by shooting anybody but by preventing the occurrence; even if the person is in a no party; whether the person is in PDP, PDP is not bad; it is the same people that go to APC: drop their umbrella and pick broom, but instead of using the broom to sweep away corruption, they are using it to sweep money into their pockets. So, those who love Mr. President don’t be angry; from the same pulpit where his dynasty was prophesied, the wind is blowing again. When God says, ‘His office let another take, then Nigeria will move forward, and corruption will be adequately embattled in the proper sense, then he economy will improve and Nigerians will rejoice.