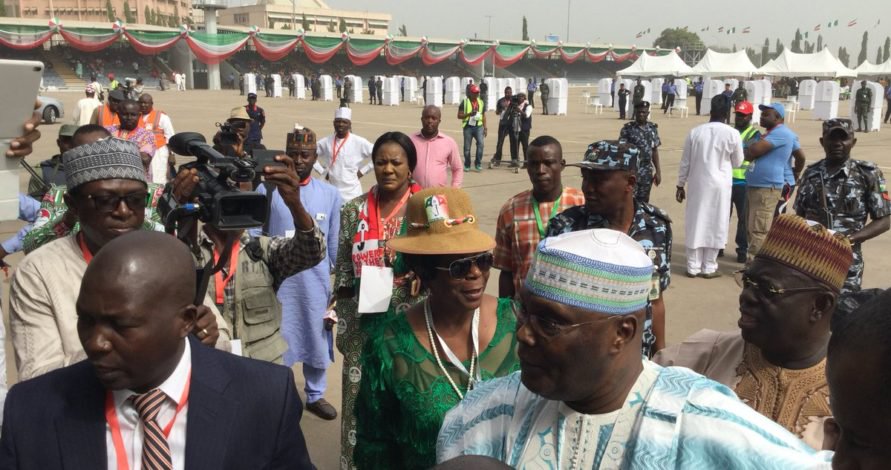 Former Nigeria’s Vice President, Atiku Abubakar has said he has not decided to run for president in 2019.

The former vice-president told VOA Hausa when he featured on a magazine program there Tuesday that Nigerians will know when he eventually takes the bold move.

“For now I have not made up my mind,” Mr. Abubakar said. “When I decide, I will let the world know.”

Mr. Abubakar’s statement is capable of demoralizing his supporters, some of whom have already commenced groundwork for his 2019 bid, said Azibola Omekwe, the national coordinator of The Atiku Rennaisance, a political group.

Mr. Azibola said the 2019 ambition of Mr. Atiku has gained considerable momentum in recent weeks, a ‘moving train’ he said would be difficult to reverse.

“Just recently, some people came out to say that they will sue the former vice-president if he fails to join the race,” Mr. Azibola said.

“That’s how serious some of his supporters have now taken his ambition.”

Mr. Abubakar’s spokesperson, Paul Ibe, said the politician’s fans should not be demoralized by the comments.

“He spoke in the context of his ongoing consultations, but he’ll eventually make up his mind to run,” Mr. Ibe said. “Those who have started politicking on his behalf should continue.”

Mr. Azibola acknowledged that the final decision on Mr. Atiku’s political choice in 2019 would be the former vice-president’s to make.

“But I’m sure he will ultimately decide to run because he’s the best option to beat President Buhari,” said Mr. Azibola, a former state legislator in Bayelsa.

“We expect him to do this within the first quarter of 2018.”

The last one month had seen Mr. Abubakar resign from the ruling All Progressives Congress to return to the Peoples Democratic Party, under which he served eight years as VP from 1999-2007.

After using his resignation letter to convey his misgivings about President Muhammadu Buhari, Mr. Atiku granted a media interview in which he accused the president of incompetence.

He also accused Mr. Buhari of stoking ethnic and tribal divisions in the country, saying he will handily ‘defeat’ the president in 2019.

Mr. Buhari has not openly exchanged words with Mr. Abubakar, but the presidency warned the former vice president to stop disparaging the president.

The reprimand followed allegations that Mr. Buhari was banned from traveling to the United States for 15 years as a consequence of his religious views.

Mr. Abubakar used the purported ban to ward off allegations that he is wanted in the U.S. for fraud.

Mr. Abubakar said he had applied for a visa to the U.S. but was denied on administrative grounds.

He, however, failed to present evidence of his claim that Mr. Buhari was also banned from the U.S. despite being challenged by the State House to do so.

American authorities have not responded to PREMIUM TIMES requests seeking clarification about both Mr. Atiku’s status and the alleged ban of the president some years back.

Mr. Ibe said Mr. Abubakar will continue sparring with the Buhari administration ahead of his formal announcement.

“What has been happening in recent weeks is sparring,” Mr. Ibe said. “We expect this to continue, but it’s not the same as a formal declaration of a presidential run.”