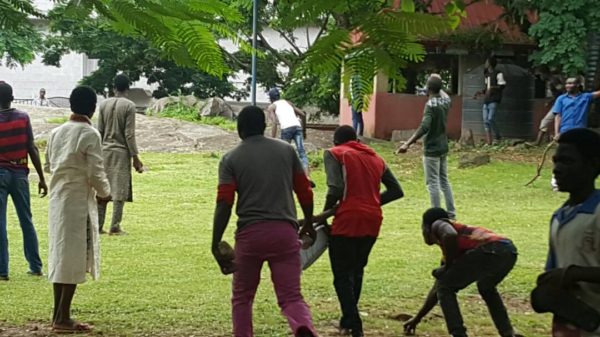 Self-acclaimed Area Father and entertainer, Charles Oputa, popularly known as Charly Boy was attacked by thugs at the popular Wuse market in Abuja on Tuesday.

In a series of tweets by one of the leaders of the ‘ResumeOrResign’ group, Deji Adeyanju, some youths attacked them when they moved to the market in the course of their protest.

“We just went to Wuse market for mobilisation against 100 days event tomorrow & a regular face at Unity Fountain brought thugs to attack us,” Deji wrote on Twitter.

“They attacked us with police on Tuesday. Tried to attack us at Unity Fountain with their government sponsored thugs. Today is Wuse Market.

“Charly Boy’s car was damaged by the thugs. This is a senseless government. #ResumeOrResign.

“There are wraps of money all over Unity Fountain shared by Pro-Buhari protesters. The government says it’s fighting corruption.”

The #ResumeOrResign protesters had started a campaign on Monday last week, demanding the return of the president who is away in the United Kigdom on a medical vacation.

Hundreds of People Killed By A Mudslide In Freetown