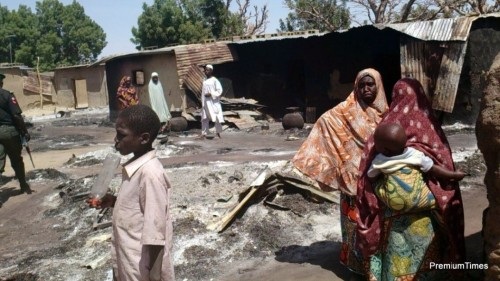 Boko Haram insurgents launched a night attack on Mildo village in Madagali Local Government Area of Adamawa State on Tuesday, killing seven people and injuring about 10 others, residents and officials have said.

The insurgents also burnt houses and shops during the attack.

Fleeing residents said the rampaging insurgents stormed the village, which is about 6-7 km from Gulak, capital of Madagali Local Government Area, on the fringes of the dreaded Sambisa forest, around 12 midnight and opened fired on sleeping residents.

A source said locals were taken unawares as they did not expect such attacks especially as the Boko Haram had long been pushed out of the area.
“They stormed our village on motorbikes and immediately opened fire on the people and slaughtering people with knives,” .

“As at the last count, seven people were slaughtered while about 10 others were injured and were rushed to a health facility in Gulak,” another resident told journalists in a telephone interview, also seeking anonymity for security reasons.